Knitting in the Car

If I've got to spent three hours a day commuting to a job that isn't mine, at least I can spend some of that time knitting. 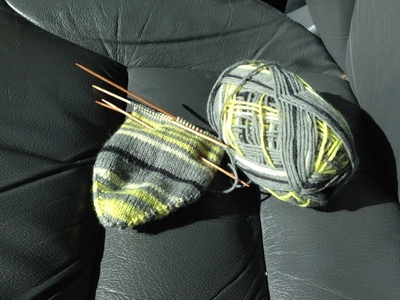 One of these weeks, I may show you some knitting isn't a pair of socks. But there will probably always be books...

by Amy Lukavics is the scariest teen novel I've read in quite a while. Take all of the real life horrors that  come along with life on the prairie in the 1800s...and then add demons to the mix. After the awful events of the previous winter, the Verner family has decided to leave their mountain home and start over in the prairie where they've been told that there are empty cabins for the taking. They do find a cabin large enough to be comfortable for their family of seven, but the interior is badly damaged and reeks of blood. Sixteen-year-old Amanda doesn't quite believe her father's explanation that someone must have butchered an animal inside, but she's more troubled by her hidden pregnancy and the endless cries of her baby sister. Whatever life on the prairie holds for her family, she believes that is has to be better than the winter they just survived. She's wrong. If you want to read something that will keep you up all night, I definitely recommend this one.

Becca and Johnny are sure the car accident that killed their loved ones was no accident and they're determined to get revenge on the boy who caused it. If You Wrong Us

by Dawn Klehr is the story of how they go about it,  combined with the backstory of the events that led to the accident. I kept getting  confused about who did what and when. Sometimes I think it was  deliberate misdirection by the author and sometimes it was just me.

On her way to appear at a writer's conference, best-selling author Livvy Flynn rolls her convertible and awakens in the basement of a woman and her flute playing daughter. The Detour by S. A. Bodeen is Misery with an unlikable teenage protagonist. Livvy's captors refuse to release her until she apologizes for the wrongs she's committed, but she doesn't know what she could have done to them. It was hard to feel much sympathy for Livvy, who is spoiled and self-centered, but the book was fast paced and a good quick read, despite an obvious twist or two.

The publishers sent me ARCs.  This post is linked to Patchwork Times, and Small Things.
Posted by Michelle at 4:00 AM

Ok so are you going with someone to their job dropping that person off then going back to pick up so 6 hours driving time a day ? 3 hours you are the passenger so you get to knit?