I know a woman who insists that every recipe ever created is available online. She may be right, but that doesn't mean that the banana bread recipes I've found and tried taste anything like my mother's. (Hey Mom, can you email yours to me? I've lost it again.)

While I could be convinced that somewhere in the vast reaches of the internet I could find Mom's exact recipe....or maybe the ones that Grandma used for her sweet pickles and banana cream pie... I'd never find my husband's tamales or his clam chowder. Those are in his head and no place else.

Someone else needs to learn to make them, if only because now and then the boys are in the mood for his tostadas and he doesn't have time to cook them. 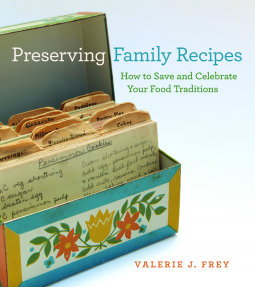 That's why I was thrilled  to get my hands on a review copy of Preserving Family Recipes: How to Save and Celebrate Your Food Traditions

by Valerie J. Frey. I read it cover to cover and I'm seriously loving this book!

In great detail, she tells you how to collect recipes from family members and maybe track down similar alternatives to ones that have been lost. She gives tips on where to look for those lost recipes, including lots of ideas that I never would have come up with on my own.

And (this is the part that I need)  she tells you how to get a recipe from someone who measures by feel and has never written anything down. There are lots of options and I'm hopeful that at least one of them will allow me to record the secrets to Hubby's  clam chowder. He's not trying to keep anything hidden, but he thinks that I should have been able to absorb the whole thing by osmosis.  I could probably make the tamales, but that chowder is a mystery to me.

This book also introduced me to the concept of "foodways" and left me with a whole list of other books I want to track down and read, just because they sound so interesting.

If I do make some sort of little family cookbook instead of just putting the recipes I'm looking for onto cards, I should include the durian and some of our little family's other culinary adventures.

Disclosure -- the publisher provided me with an ARC.
Posted by Michelle at 3:00 AM