Caron Simply Soft is one of my favorite cheap box store yarns, so their new Simply Soft Shadows intrigued me. When I was at Michaels and had an extra 40% off coupon, I picked a up a skein. I think I was going to try to knit Calorimetry out of it.

Then I met the hugely pregnant lady who runs the nursery at our new church. How could I not decide to knit something for a mommy-to-be wearing a nametag on her belly? 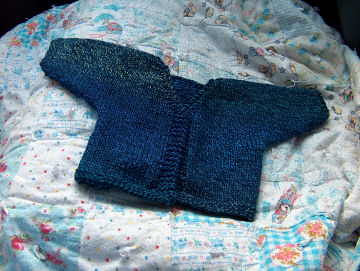 It's a modified Heartbreakingly Cute Baby Kimono, based on the changes described here. I added a little bit of garter stitch at the cuffs because I didn't like the way the ones on Leif's kimono came out. It only took an evening and a half to knit and when I bound off there was just enough yarn left in the skein to sew up the seams. I still can't believe I didn't run out.

The yarn is a little nicer to the touch than regular Simply Soft, and I love the muted striping effect. But I'm not sure I'd invest in enough skeins for a big project.

I finished the seams in the church parking lot this morning, took a picture of it on the front seat, and handed it to the mommy-to-be shortly before she left for the hospital. 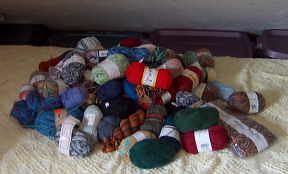 It's not the 5000 grams I'll be knitting my dent out of. I had a picture of the acrylic, but then I re-weighed the bag and realized that it was actually sixteen pounds, not twelve. The scale was on the carpet the first time I weighed it. The bag of sock yarn weighed about the right amount, so it's what I took a picture of.

I've been working on the details --

If I knit up at least 500 grams of yarn a month, it'll only take me until the end of next February. I can go through 100 grams of worsted weight in an extremely productive day, or 50 grams in a more reasonable evening. So that makes five or ten days a month of actually using up yarn. And leaves at least twenty days to quilt or play with laceweight or sock yarn. Or not do anything at all. And I'll still manage to finish before the end of time.

I will knit from my stash, but I can buy new yarn or knitting books to celebrate significant FO's or weight loss. Christmas yarn, or yarn bought with Christmas money, doesn't count. Auction yarn, or any other yarn that falls into my lap, does not count. Thrift store sweaters only count if I go actively looking for them. Garage sale yarn -- oh, I don't know! It's not like I'm not gonna cheat.

If my weighing and guessing and calculating is anywhere near accurate, 5000 grams is about 10% of my stash. It'd be equal to 100 skeins of yarn, if I didn't use so much cheap acrylic. Doesn't that sound like a lot? Enough to be considered a huge dent? I'm using grams instead of yards or skeins because it's the most accurate way I can think of to measure how much yarn I'm actually using.

Oh, and if anyone wants to do this with me, I'd love the company!
Posted by Michelle at 2:41 PM

sounds like a good plan! I'm knitting from stash, but not weighing anything. I have enough yarn for 28 adult sweaters right now! and 2 bins of extra - hat/mitten/scarf yarn AND 2 drawers of sock yarn! I have an inventory sheet for the sweater yarn and just delete the row when I use the yarn (I've only deleted 2 rows so far this year -but I haven't bought anymore!)

Can't join you in the stash thing, though. I'm a fairly new knitter, and right now I'm trying to build up a sizeable stash to feel guilty about. I have a personal theory that a true knitter is always slightly ashamed of their yarn stash.

I think I must join you in the attempt to knit 5,000 grams of yarn.

I'm glad that we don't have to pre-select which yarn counts.

But... do we have to knit it all before we can buy new? There's no way I'll knit that much before Stitches!