I didn't realize until this morning that I forgot to write about the incident that sparked yesterday's little anti-heirloom rant. (And I'm not against heirlooms, I'm against the attitude that everything we make should be treated like a precious treasure destined to be passed down through the ages.)

A friend had asked if I had a picture of my Swallowtail shawl and I responded that I take pictures of all of my FOs before something happens to them. Not two hours later, Heath wore his new sweater to the park and was sloshing around in the stream looking for neat rocks. And throwing mud at his buddies, who of course threw mud back at him. We mommies did quickly put an end to that game, but only because we didn't want the muck in our cars. 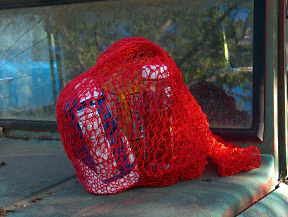 And, speaking of things that aren't destined to be heirlooms, my Turkish String Bag is done. I like it well enough, and I might do another one someday, but if I do, I'll use much cheaper yarn. This really shouldn't have been a $20 project. What sounds kind of tempting is to get a cone of Peaches n Cream at WalMart and knit up a bunch of matching ones for the groceries, but I think that's just the part of me that'll jump at absolutely any reason to buy more yarn talking.

I think tonight's plan is to work on the new sweater and see if my plan to salvage the neckline will actually work. Wish me luck!
Posted by Michelle at 6:35 PM

Oh, by the way, I've got a free yarn giveaway on my blog, if you're interested. You're the queen of finding great shawls and stuff. Check it out!