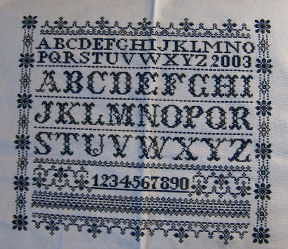 There's a lot of advice floating around about how to make sure the handknits will last down to the grandkids -- knit for the older kids so things can be handed down to the littler ones...knit it in a neutral color...knit it in a classic style...and then there's that trick about doing the button bands on a cardigan so the buttons can be switched from the girl side to the boy side.

The quilts are supposed to be wrapped in acid-free tissue, carefully taken out and refolded every few months to prevent creases from weakening the fibers....the needlework is supposed to be kept out of direct light...and appraised in case the house burns down and it's destroyed...

I don't do any of that. I want to knit and quilt and stitch a whole bunch of stuff and if it all lasts forever, sooner or later the house will be full. My heroine is a lady who posted to the knitlist ages ago that she sends her kids out to play in their sweaters so she'll have an excuse to knit more of them.

Were the farm wives who made all of those wonderful feedsack quilts stressing out over how many years the fabric would last? And look at how many of those are still around and in decent shape.

My favorite heirlooms are the accidental ones. The tole painted daisies my mom was getting rid of because she'd done the same painting for herself, her mother, and my father's mother, and they've all come back to her. Which are now at my house because I want at least one example of what she spent so many years doing. The sock monkey Grandma Walters made. The honey jar my Grandma Marr made that sat on her kitchen counter for decades, unused because she accidentally glazed the top to the base.

Hopefully some of my projects do survive longer than I do -- and please let them be good ones, not the ones I keep hoping will get lost or melted in the dryer or eaten by wild animals.

I can imagine the sampler as an heirloom, but not unless I break down and spend the money to have it framed.
Posted by Michelle at 9:40 PM

I love it. You go, girl! I had a best friend, growing up, who was afraid to come home with a speck of dirt on her. My mom, on the other hand, would look at me after a jaunt scrambling around the creek with an eye of satisfaction, and pronounce, "You must have had FUN getting THAT dirty!" (Although that may be why my all-time favorite sweater she knitted me was out of indestructible 1960's acrylic.)

(I got interrupted, I was going to add, that honey jar sounds wonderful!)

ABSOLUTELY RIGHT!!!! That's exactly how I feel. What's the use of making something for someone you love, and then loving the thing more than the someone? A hearty "Hear, Hear!" from over here (hee hee, pun intended).