Last year at Oregon Flock and Fiber, I saw some old treadle sewing machine bases hooked up to spinning wheel parts and mentioned to my grandma that if she came across a cheap enough one at the auctions I could use it. She had one in the back room of the antique mall already that she'd picked up at the auction for and asked if I'd want it for Christmas.

I said yes, and it was a couple of months before I saw a blurry picture of it on her cell phone. A few weeks after that, my mother called and asked if I'd been down to the shop to look at it because it was really "rough" and she didn't think I knew what I'd agreed to. I don't think there's such a thing as a treadle sewing machine too rough for me to want it. Too rough for me to pay what a lot of the antique stores want, sure, but I was only really after the treadle part and if it was that bad, it could live on the enclosed front porch and be a plant stand. This was before the rooster and two geese took up residence out there. 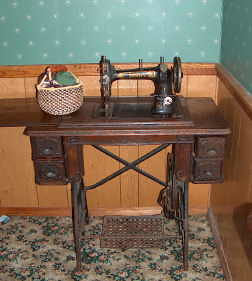 It was a few more weeks before I saw my new toy up close and personal. It has little drawers down the sides and decorative carving and there's a MACHINE in it. Grandma had asked if I wanted her to take the machine out because it was frozen up and worthless, but I told her I'd like to play around with it -- so she oiled it and fiddled with it and it looks like it might actually work if we can find a bobbin...which she thinks she has in a box somewhere.

I guess she hadn't even meant to bid on it, and now I've got a real treadle sewing machine that I would've lusted after if I'd seen it in an antique store. It's got dings and scrapes and a couple of rings where someone must've kept plants on top of it, but if it was in pristine condition it wouldn't be so perfect for our old farmhouse.

She finally made it down to the old farmhouse this morning, and I'm tempted to spend a couple of hours just sitting and drooling over her. Or knit a doily to cover her up with. Grandma sent a doily, but this gorgeous thing needs something made just for her. I should quilt a table runner -- much more practical, since I've never made a doily.

Yes, I've gone ga-ga over a piece of furniture.

I'm also smitten with a book I brought home from the library last week, Family Ties Old Quilt Patterns From New Cloth by Nancilu Butler Burdick. It's full of patterns based on the quilts made by Talula Gilbert Bottoms, the author's grandmother. Between 1870s and 1945, she made more than 200 quilts.

Only a few of the pictures in this book are of her originals, but there are brief bits about how she made hers and what became of them. Some were packed away the moment she died. One is being used by a descendant to cover the washer and dryer on her back porch.

There's another book about her life that apparently does have pictures of her stuff. The stupid library doesn't have a copy, and of course it's out of print. I found one online last night, but the shipping rates made me hesitate. But I found one on Ebay this morning for $8, with cheaper shipping! And it's on its way to me now.

For a couple of months, I've been having urges to learn how to piece curves and these quilts are absolutely full of them. And I've got those big bags of scraps from Grandma... It was meant to be.

But mom showed up with this -- 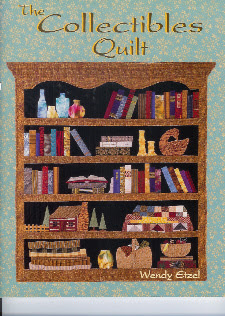 And now I can't decide what's calling to me loudest. Did I mention that lace and those socks?
Posted by Michelle at 12:59 PM

My best friend Karen, when I was a teenager, had one of those in her house, passed down from her grandma. Instant memories when I saw that picture.

Karen is the one I designed my Water Turtles shawl for in my book.