Leif has decided that if the sky is even beginning to lighten, he must get up. Do you know how early the sky starts to lighten? I don't, but if I can struggle for an eternity trying to coax him back to bed and it's still only six am when I finally give up and haul us both out into the front room, it must be pretty darn early.

But he does make up for it by being so darn cute at the park. He scares the other mommies. I guess they look at him and see a baby half his age. Because they all need to get my attention and warn me that he's climbing.

I've been watching him do it for a couple of weeks now, and he's pretty darn good at it. If he wasn't at the park climbing everything in sight, I'm afraid to think what he'd be trying to climb at home.

I love the park. 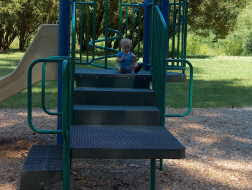 I'm not buying yarn until I use up 5000 grams of what I've already got. My vague plan was to use 500 grams of yarn a month. I've knitted up more than 1000 grams of yarn in the past thirty days, not counting at least 150 grams I had to frog. How did I do that?! I don't think I did an excessive amount of knitting. There were a few days I didn't even knit at all. I may be able to buy more yarn sooner than I expected.

That's good because I want to knit A Cardigan For Merry before Leif gets too big to wear it. The pattern calls for Knitpicks Andean Treasure. I'm not going to turn a toddler in a baby alpaca cardigan loose at the park. I've got some Wool-Ease sport that I could use, but I really did have other plans for that yarn. Knitpicks Telemark is the right gauge, I've been wanting to make a project with it, and they've got twelve brand new colors, all of them absolutely gorgeous...and while I was typing that, I realized that I do have some other nice sport weight acrylic in my stash. Dug it out and it's a prettier color than I remembered, but 100 yards less than I need for the cardigan.

So I'll be waiting for the Telemark.
Posted by Michelle at 6:26 PM

Hooray, Hooray, I just LOVE that pattern! I'm a HUGE LOTR fan, so anything "elvish" is an instant hit with me. I'm going to put that in my "to-do" queue.

That was funny what you wrote about Leif. My daughter is 18 mos old, but she's the same size as most of my friend's 3 month babies. Whenever we got to the playground, I get such horrified looks from other moms for letting my sweetie climb the jungle gym!

Hi Michelle, Thanks for your comment on my round robin quilt. I was SO glad to have it finished! I see you are a knitter too. And have a beautiful old treadle machine. I belong to a group called Treadleon that can really help you with parts, restoration and actually using it. It's a great group of enablers and fun people. Email me if you're interested. gmc sew at comcast dot net. Great blogs btw!