There's a word for what I've been doing for the past few days. I've been slogging -- doesn't that sound nice and productive? Until I found out I was slogging, I thought I was just spending a lot of time getting nowhere. 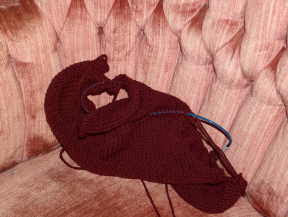 I signed up for the Mason Dixon Slogalong hoping that it would motivate me to finally make some progress on the Alterknits wrap, but what's got me totally bogged down right now are the sleeves for Heath's Weasley Sweater. I tried twice to pick up the stitches the way the pattern told me to, then decided to work the sleeves separately so I could do them both at the same time and have the decreases and lengths match. Good idea, but it's taking so miserably long to see any progress that I'm rapidly losing my enthusiasm.

The back went quickly because I was anxious to start the front. The front was entertaining, because it had that great big intarsia H to deal with. The tops of the sleeves have the same number of stitches as the body, so it's taking me twice as long to see the same amount of progress.

This is why I usually try to do sleeves first. Because sleeves are boring and they have decreases to keep track of and I'd rather get them out of the way while I'm still all excited about a project. And they're usually narrow, so they make good swatches if I knit one at a time.

I'll keep going because I do have hopes of finishing before it gets too hot outside for Heath to wear it. If I manage an inch or two a night, the whole thing will be behind me soon. Except for the seams. I'm not excited about those, either. Seams never excite me.
Posted by Michelle at 2:02 PM

That's a really good idea about doing the sleeves first. Usually I do the back first, but I definitely agree with you about the sleeves being the most boring part. Great idea!