I Think I Know What to Make For Dinner

A few weeks ago, the boys and I were at the thrift shop and I was irresistibly drawn to this plastic box of recipe cards. It's the Betty Crocker Recipe Card Library (published in 1971) and I am smitten. 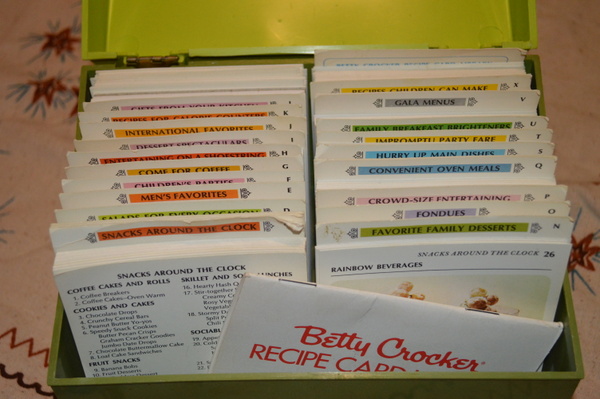 I've been in a complete and total rut when it comes to dinner ideas. Years and years ago, my husband suggested opening the cookbook at random and picking a recipe to make for dinner. Now that I've reminded him of that and started actually doing it, he might be regretting the idea.

Instead of choosing at random, which would not end well, I went through the box and picked half a dozen things that looked like they had potential.

So far, we've had Salmon Noodles Romanoff, which were mediocre at best, Chicken Fricassee With Dumplings, which was pretty darn good with the substitution of a Costco rotisserie chicken, and Oven Porcupines, which kind of bewildered my husband and sons. I got some validation at an estate sale a few days later when Hubby opened and old cookbook and the first recipe he turned to was for Oven Porcupines. They're a legitimate thing! 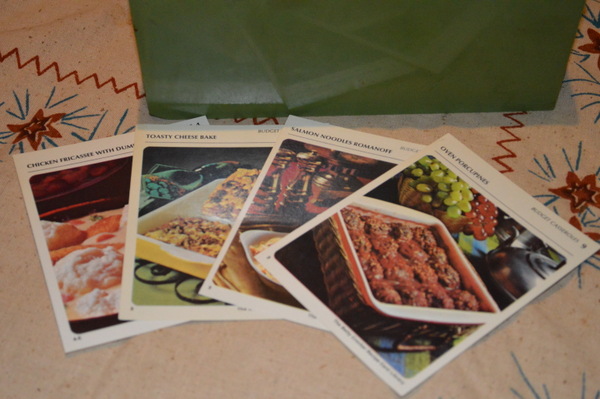 The Toasty Cheese Bake was awful. Imagine French toast with hamburger and cheddar cheese layered in. Its a bit worse than it sounds. My oldest son has a plan for making it into something tasty. I'll let you know if that works out.

For five bucks, this thing was a great investment. I saw an identical one at a garage sale last weekend for a dollar, but I'm not beating myself up over that. I also saw just the cards in a bag at Goodwill for the same amount I paid. Despite the prices I just saw on Etsy and Amazon,  these are out there and they're inexpensive.

I love that there's no coconut oil, or kale, or quinoa... These meals call for stuff I've got in my kitchen and the ones I've chosen so far have been surprisingly inexpensive to make.

And I love that this thing was doing Pinteret before Pinterest was a thing. Look....there's knitting in this one! 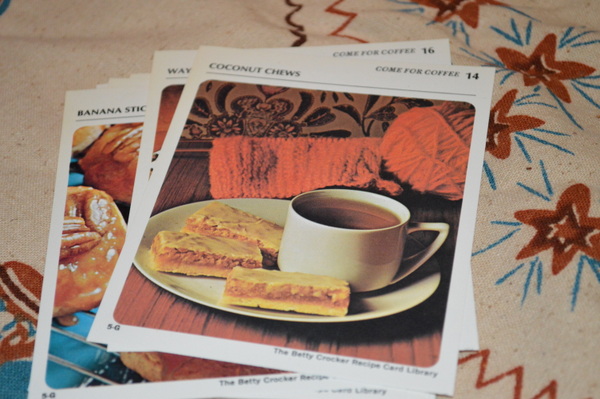 At that estate sale I posted about a couple of days ago, I found a different boxed set of cards, The McCalls Great American Recipe Card Collection, and a huge armload of recipe books and I think I pulled a muscle hauling them down the street to the car.

My future looks like it's going to be filled with fun dinner time experiments. If you had one of these sets, are there any recommendations of  things to try or avoid?
Posted by Michelle at 4:00 AM

Boy does those cards bring back memories. I was young and freshly married and didn’t know how to cook. Started collecting these but never had all. We were on a budget. Thanks for the stroll back in time.. it’s amazi what you fine.

That is a neat collection of recipes! Would love to know what your favorites end up being!

Wow, this is amazing. Wrecking our brain every day for new ideas to cook something is a bit too much but these cards will definitely help a lot.