These Socks Aren't Exciting, but They've Been Places! 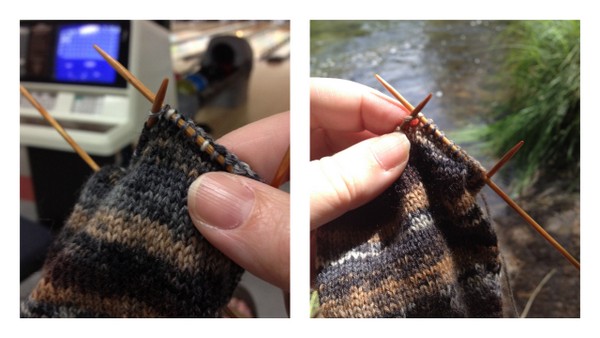 I've taken this pair in progress bowling three times and down to the river twice and I'm sure they'll have lots more adventures by the time they're done. Either they'll be filled with happy memories or I'll pull them out of the drawer years from now and have no clue where they came from or what yarn I used.

What if those X-Ray glasses that they advertised in the back of comic books were real? Martin's son got a pair, but they just make his eyes hurt. When Martin tries them on, though, they work exactly as advertised. He can actually see through clothes, and walls, and furniture. The thrill is worth a little headache, until he starts to see far more than he wanted to. Hunter Shea's Mail Order Massacres are all kinds of fun. He started with instant Sea Serpents in Just Add Water, now we've got the X-Ray Glasses and, coming in a few months, we get a nuclear submarine. I'm really enjoying this series.

The Way It Hurts by Patty Blount

What drew me to this book was the social media aspect of it, how something can suddenly go viral and spin completely out of control. And that's what I wound up liking most about the story, but it took a long time for it to get there. Elijah is putting everything he has into his band, sure that when they make it big it will solve the problems in his life. When he sees Kristen sing in her school musical, he decides that her voice is just what they're missing. The problem is that Kristen isn't into metal and doesn't want to scream for him, no matter how much he posts about it online. While the two of them are bantering back and forth with the "KrisVsEli" hashtag, each in pursuit of their own goals, they're stirring up their online fans until things become dangerous. And that's when the book really pulled me in.  For a book with absolutely no sex, there are way too many references to Eli's erections and Kristen's chest. It's a young adult novel, and it reads like one, but it was a fun read once things got interesting.

Based on the book's description, I really thought I'd like this one.  Karl Lawson becomes the prime suspect in the disappearance of his niece, mostly due to the work of an overzealous reporter. Six years later, he has lost everything that was important to him and the reporter who did it to him is thriving. I was interested for the first third of the book, but after that it dragged on and on and I was never sure which of the two main characters I was supposed to sympathize with. (After a while, it wound up being neither.)


Disclosure -- I was provided with advance review copies by the publishers. All opinions are my own. This post is linked to iknead2knit, and  Frontier Dreams
Posted by Michelle at 4:00 AM

I haven't been bowling in years. I love the traveling socks. The river view is great.