I couldn't narrow it down to six skeins this time, so I wound up with ten. That's after trimming my choices down... 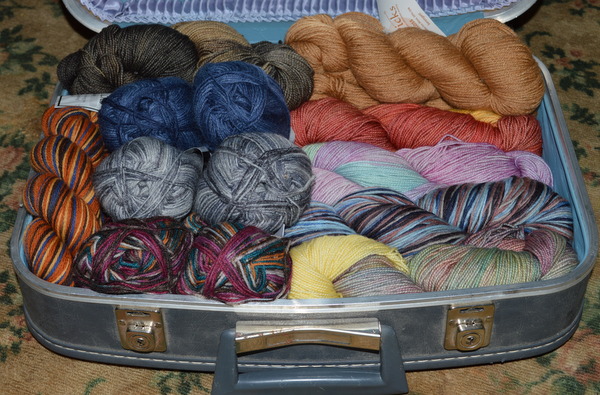 Every three months or so, I've been going through my yarn stash and putting together a sampler of what I think I'll be knitting until it's time to do it again. For the previous samplers, I've tried to include a mix of long buried stash along with the new stuff, but when I was paring down my choices I wound up with mostly newer stuff. And that's okay. I used up some really old stash from the last samplers and it'll all balance out in the end. Or not.

Here's the before and after of sampler #3. Two more inches of ribbing and I'll have that seventh pair finished. For someone who wasn't trying to finish all of the yarn in the case, I sure came close to actually accomplishing it.

Right now, my biggest problem is that I want to cast on with absolutely everything right this second.
Posted by Michelle at 4:00 AM

You did a beautiful job going through your last challenges. I can't wait to see the lovely sock coming out of this next grouping. Beautiful colors in there

Awesome job there! I here you on the startitis, only mine is in the sewing area right now.