Is it September Yet?

I'm getting impatient, waiting for September 1st and the next Super Scary Sock pattern. It's a weird sort of limbo because I might not like the pattern, which means I'll be waiting for September 11... So what am I supposed to do until then? I didn't want to cast on something  complicated, because if I put that down when the new pattern comes out, odds are slim that I'll pick it back up. The socks I had planned to cast on are in a colorway that seems to be on the supply list...and I want to save the plain stockinette pair I'm already working on for math assignment knitting.

So last night after I stuck dinner into the oven to bake, I cast on these. By the time I headed to bed at a little before midnight, I was most of the way through the short row heel. It's the Lazy Lace socks again, this time with a lace element that I found in another pattern. 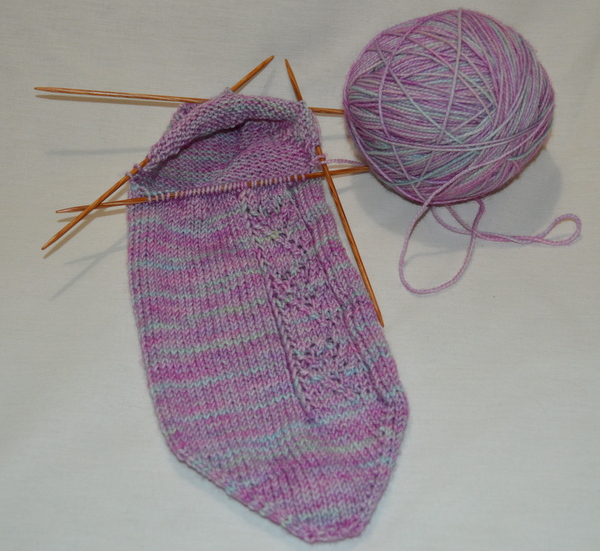 One of my blog readers had a question about knitting a pair of socks from 50 gram skeins:


When you buy two small skeins of yarn for one
pair of socks, do you make one sock from each skein?
Or do you make one, then use the rest of the skein to begin
the second sock before opening the second skein?
Perhaps it depends on the yarn, whether it stripes or is
plain or ombré.

When I'm using two skeins of sock yarn I use one for the first sock, then cast on the second sock from the other skein. There are a couple of reasons for that. If I'm using self-striping yarn with a long repeat, I'd rather not worry about what's going to happen with the colors  when I rejoin the yarn at a random point. That was a problem with my second pair of Express Lane socks, except it was a knot in the middle of my skein that created the problem. 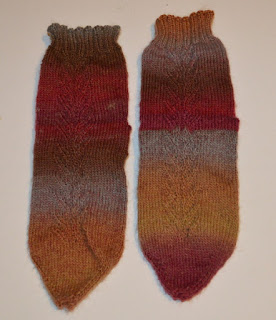 Sometimes the two skeins just look different, even if they're the same dye lot. My worst example of that was the Catnip Socks. It was obvious from the beginning that one skein was darker, so I used it for contrasting toes and heels. There have been other pairs where the difference was more subtle and I didn't see the problem until I was halfway through the second sock. Changing yarn mid-sock would have made the problem a lot more noticeable. 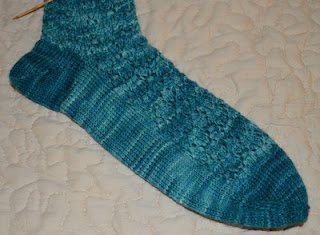 Using one skein for each sock also means that I won't run out of yarn when I least want to, like in the middle of a heel or bit of lace. The leftovers will be, more or less, divided equally when I want to use them later for contrasting heels or toes on another pair.  It won't be perfect, because the yardage per skein can vary a bit, but it's always been close enough for me to work with it.
Posted by Michelle at 4:00 AM

Nooo, September means that school starts for me, both my high school job and my university position. I am thoroughly enjoying my last few days of my Summer vacation. I love those socks though. What a pretty yarn and pattern.

Yes, I will have to knit a jumper with alpaga wool, brought from Arlquipa, in Pérou.
Have to unlarge a * motif* to knit inside the work.
It will be in my blog at a time.
But, if you go up my * bricolage* blog, you will see mini jumpers create long ago!l
Hello from Switzerland