{Yarn Along} a new pile of socks 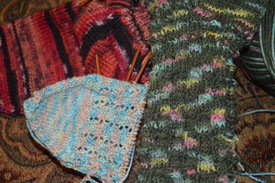 I've got a whole pile of socks in progress. There's the plain pair that I'm knitting with the Kroy Stripes, and the Mock Croc Socks, and a new pair I started this week.

The new ones were going to be a plain pair to work on when the striped socks are done, but the colors are knitting up more subtly than I expected so I decided to add some texture. It's the lace rib from Barbara G. Walker's Treasury of Knitting Patterns.

by Charity Vogel. It tells the story of the Angola train wreck, but beyond that it's a fascinating look at the rail travel and newspaper coverage of the era. No photographs were taken in the aftermath of the disaster, but the book includes many illustrations from the original newspaper stories.

Hubby and I have been watching the new season of Hell on Wheels, and the kids and I are waiting for The Lone Ranger to hit the cheap theater, so I've got trains on the brain lately...and now I've got more historical knowledge than I started out with.

On December 18, 1867, the Buffalo and Erie Railroad’s eastbound New York Express derailed as it approached the high truss bridge over Big Sister Creek, just east of the small settlement of Angola, New York, on the shores of Lake Erie. The last two cars of the express train were pitched completely off the tracks and plummeted into the creek bed below. When they struck bottom, one of the wrecked cars was immediately engulfed in flames as the heating stoves in the coach spilled out coals and ignited its wooden timbers. The other car was badly smashed. About fifty people died at the bottom of the gorge or shortly thereafter, and dozens more were injured. Rescuers from the small rural community responded with haste, but there was almost nothing they could do but listen to the cries of the dying—and carry away the dead and injured thrown clear of the fiery wreck. The next day and in the weeks that followed, newspapers across the country carried news of the “Angola Horror,” one of the deadliest railway accidents to that point in U.S. history.

In a dramatic historical narrative, Charity Vogel tells the gripping, true-to-life story of the wreck and the characters involved in the tragic accident. Her tale weaves together the stories of the people—some unknown; others soon to be famous—caught up in the disaster, the facts of the New York Express’s fateful run, the fiery scenes in the creek ravine, and the subsequent legal, legislative, and journalistic search for answers to the question: what had happened at Angola, and why? The Angola Horror is a classic story of disaster and its aftermath, in which events coincide to produce horrific consequences and people are forced to respond to experiences that test the limits of their endurance. Vogel sets the Angola Horror against a broader context of the developing technology of railroads, the culture of the nation’s print media, the public policy legislation of the post–Civil War era, and, finally, the culture of death and mourning in the Victorian period. The Angola Horror sheds light on the psyche of the American nation. The fatal wreck of an express train nine years later, during a similar bridge crossing in Ashtabula, Ohio, serves as a chilling coda to the story.

The publisher provided me with an advance copy of The Angola Horror.  For more pretty knitting projects to drool over, check out On the Needles at Patchwork Times and Work in Progress Wednesdays at Tami's Amis.