{Whatcha Reading?} The Boy Who Could See Demons 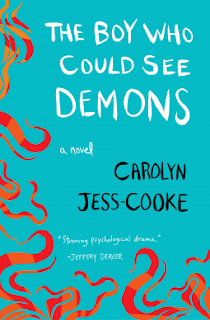 I know next to nothing about Northern Ireland and The Troubles, but when I saw the description of The Boy Who Could See Demons

, a book about a psychiatrist treating a boy who sees demons with its promise that things were more complicated than they seemed, I was hooked.

Ten year old Alex Connolly lives alone with his mother and Ruen, a nine thousand year old demon who appears to him in three different forms.  Dr. Anya Molokova believes that Alex's demon is a manifestation of early onset schizophrenia, which claimed the life of her own daughter.  But the things the boy knows about her, things he learned from Ruen, are impossible for him to know.  Until the very end, I wasn't sure if the demon was a supernatural being or a trick of Alex's mental illness.

I loved this book. It was different from anything else I've read, and provided a glimpse of a place and situation that is so foreign to me that  I still can't quite wrap my mind around it. I think it was the scene where Dr. Molokova asked Alex if he'd ever seen a gun or bullets in real life that made it hit home what a completely different world these characters live in from me and my own family. I'd bet that every kid I know has seen guns up close, if only because they've walked past the sporting goods section at Walmart.

I think I'll look for the author's first book, The Guardian Angel's Journal.
Posted by Michelle at 4:00 AM

Sounds interesting. I just finished listening to A Most Unsuitable Match by Stephanie Grace Whitson, which was wonderful. I highly recommend it.