I've had this sock yarn in my stash for years. It's Opal Crocodile and, back when it was a fad on the knitting lists,  I wanted it desperately. Then I was afraid to cast on with it, because what if I messed up. (That's a silly fear, by the way. With most knitting projects, you can just unravel false starts and cast on again with something else.) 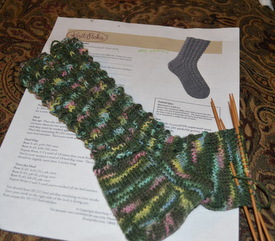 The yarn has been up in the sewing room, so safely tucked away that I'd completely forgotten about it until I rediscovered it while I was digging out yarn for the pooling sock yarn challenge. If there was ever a time to make socks with my crocodile, it's now. I planned on plain stockinette, but then I googled images because I couldn't remember what the stuff was supposed to look like if it "crocked" right and found the Mock Croc Socks, a free pattern from Knitpicks. Crocodile colors and texture? Yup, that's what I needed to do with this yarn. 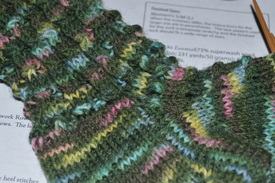 Maybe because we've had so many adventures with the local varmits over the past few weeks, I decided to pick up Pigs in Clover: Or How I Accidentally Fell in Love with the Good Life

by Simon Dawson. It's been in my to-read pile for a while now.
Here's how the book opens --
As of this moment in time, nobody has died, nobody has given birth and nobody has escaped. 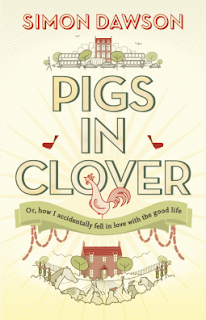 I thought our bees and chickens and geese and cats were stressful! Compared to Simon and his wife, our family has had it easy. Before a noisy New Year's Eve when Simon found himself agreeing to whatever his wife had just suggested to him, he'd never been to a zoo or petting farm, but he goes along with her plans to move from London to Exmoor and before he knows it, they've got chickens and horses and pigs and sheep and they're both learning as they go.

Pigs in Clover tells the story of their eleven year transformation from Londoners to self-sufficient smallholders. I loved reading about the Dawsons, their growing menagerie of animals, and the bumps along the road they encountered as they learned to care for them.

The publisher provided me with a review copy of Pigs in Clover.
Posted by Michelle at 4:00 AM