Both sets of my grandparents lived in Mid-Century modern houses when I was growing up. The first house Hubby and I rented was Mid-Century modern. It's no wonder that I've developed a soft spot for the architectural style and its furnishings, which led me to read That Touch of Ink, the second book in Diane Vallere's Mad for Mod mystery series. 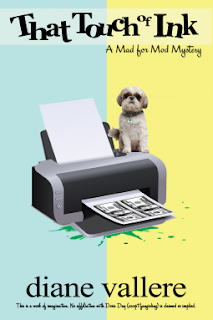 When interior decorator Madison Night receives a five thousand dollar bill in the mail, she knows it’s a message from her past. But when she discovers a corpse while trying to learn of the bill’s value, Madison suspects her former lover wants more than a reconciliation. His actions belie his intentions, and even a gallon of daisy yellow paint can’t hide the writing on the wall. Madison follows a circuit of rare dollars and common sense and discovers a counterfeit operation, a jealous lover, and the true value of her independence.

I've only watched a handful of Doris Day movies and none of those recently, but I think Diane Valerre did a neat job of capturing their madcap feel in this story of counterfeiters and kidnappers. I haven't read Pillow Stalk, the first book in the series, and I definitely did feel like I was missing something. I also didn't get all of the specific references to designers and styles, but it was still a fun read. And now I'm thinking about buying the first book from the series to see what I missed by skipping it.

You can find out more about the five thousand dollar bill and the other denominations of paper money issued by the United States in Monumental Money: People and Places on U.S. Paper Money

by Yigal Arkin. My boys are at the stage where they've got more questions about who is on which bill and what denominations they come in than I can answer off the top of my head, so I read through this one for a crash course.

Disclosure -- I was provided review copies of both books by their publishers. I'm linking up to It's Monday! What are you reading? at Book Journey.
Posted by Michelle at 4:00 AM