please just tell them what it means... 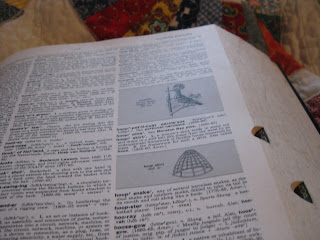 A few weeks ago, I followed a link to the essay Where Did Our Vocabulary Go? and found myself in a heated online debate about whether it's better parenting to tell kids to look up new words for themselves or just tell them what it means. I think I was the only one who voted to just answer the question. (I'm also pretty sure that I was the only homeschooler involved in the discussion. It might be fun to ask some other homeschoolers and see what they think.)

If I know how to define the word, I'll tell my kids what it means. Why make them put the book down and look it up? They can learn about alphabetical order and guide words when they're not in the middle of an interesting story.

That's if the word they want is even IN the dictionary. We went through six or seven different children' s dictionaries in our house before I finally gave up on them. By the time my kids (and that includes the littlest two) don't know what it means, it's time to Google it. I love that the Kindles allow them to quickly click and get the meaning of most words. Not because it keeps them from bugging me, but because it doesn't interrupt their reading as much.

My seven and eight year olds already know most of those million dollar words listed in that essay. Maybe it's a homeschooling thing. Or a listening to lots of good audio books in the car thing.

As for learning to do research -- the same week I read that article, all four of  the kids got into a debate about whether or not anteaters have teeth. There's no shortage of research going on in this house. Teenage Daughter has a new favorite word, erinaceous. She discovered that one on Pinterest.

Anyone else agree with me that Pinterest and Wikipedia just might be the modern equivalent to learning neat facts by flipping through a dictionary or hardback encyclopedia?

I'll be linking this post to WFMW at We are THAT Family.

Lucy from Charm About You had a great point about Wikipedia being full of misinformation. Most of the discoveries my kids tell me about include whether or not they've verified whatever it is through another source.  We've found errors in television documentaries, and those children's books from the library that are held up as fact-checked and superior to the internet. Two books from respectable publishers gave us totally different information about the same animal last week.
Posted by Michelle at 1:27 PM

I say just tell them - I always did my boys when we were homeschooling. NOW I tell them to look it up, lol. I agree that Wikipedia is the new way to learn, although you have to be careful - not everything you see is correct! And for word definitions, we go first to Webster's online 1913 and 1828 Dictionary. Sometimes we need to look up words from the King James bible and they're not anywhere else!

Lucy | Charm About You said...

I totally see your point and agree that's the best option if you're in the middle of something but Wikipedia is totally full of misinformation and you can't beat the Dictionary in my book ;) I do love technology but there's something to be said for taking the time to look it up and, maybe it's just me but I seem to remember things I've read in a tangible book far better than things I've read online.

I always told my kids to 'look it up'. It helps with spelling AND reading. I understand the problem when they are in the middle of something but both my kids were visual learners and it helped.

We home school our 14 year old son as well, and for us it depends on the situation if we tell him or make him look it up. If he is holding his ipad in his hands and looks up at me and asks what a word means, he gets a look, the one that says " you have a very expensive technological device IN YOUR HANDS and you are asking me why ? " , now if we are in the middle of another activity and he does not have access at his fingertips at that very moment, then I tell him, if we stopped doing what we were in the middle of just so he could go to look it up, we would never get back to the first thing we were doing !

We also homeschooled our 7 children. One of my best memories is when my husband was reading aloud at bedtime to our family and he came across the word "ambergris." He didn't know what it was, so he opened the dictionary to find out. "I know what it is!" said 7 year old Jacob. He knew from reading "Encyclopedia Brown" books. Look it up if you haven't come across this word yet! It is very interesting, to say the least.

We use dictionary for word meanings and have to admit that we do visit Wikipedia for general facts. But since DD is young, we haven't got around the problem of fact checking yet.Intersting post!
-Reshama @StackingBooks.com

I tend to just tell them on the basis they can learn a meaning now while in context to what they are reading about knowing that they will research these things at later dates. We definitely encourage finding things out for themselves but if they're asking they're doing that research right there. We homeschool.. No lack of research in our home either ;)