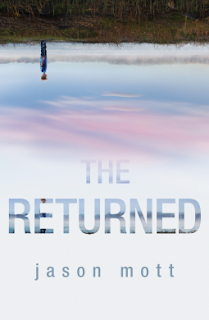 Jacob Hargrave's parents lost their only son when he slipped away from his eighth birthday party and drowned in the river near their home.  Now, almost fifty years later, a  man in a suit is standing at their front door with a little boy at his side. Jacob. Or something that looks and acts exactly like Jacob did before his death. He was found on the banks of a river in China.

The dead are returning. Not as zombies or monsters -- people are coming back just as they were in life. No one knows how, or why. But tensions are rising as more and more people appear. The book focuses on the Hargrave family and the small town they live in, but the author also provides glimpses of other people in other places. It's an interesting exploration of what would happen if the dearly departed were suddenly there again. I do wish that the author had provided more glimpses of the other "returned" -- the artist who came back to enjoy the fame that he'd only achieved after his death and the Japanese soldier desperately trying to find someone to surrender to both intrigued me.

According to the author's website, ABC is making a television show based on the book. That should be interesting. There are also three prequels to the book, all of them available as free Kindle editions -- The First


Disclosure -- a copy of the book was provided by the publisher. I'm linking up to It's Monday! What are you reading? at Book Journey.
Posted by Michelle at 4:00 AM