{Thrift Shop Temptations} The Things We Can't Have

I've spent the past week convincing myself that it would be cheating to call Christmas Storybook Land our museum trip of the month for December. I could twist the rules enough to allow it, or just give myself permission to take the month off because lots of things don't happen during the holidays.

On Friday, I drove us up to the Bush Barn Art Center. It's one of the options that I was saving for a month when I was short of time and I picked that one because, unlike the museums which don't change, there will be different art in a few months. Turns out they're closed from Christmas until the first of the year, so we didn't get to see any art. We'll go next week when they're open.

What do you do when you can't look at art? Go to thrift shops, of course...

I always look through the vintage books because sometimes there are Nancy Drews hiding there. One of my sons fell in love with this old book, which someone had "repaired" by gluing upholstery fabric over what was left of the original cover.

Want to guess what the book inside is? 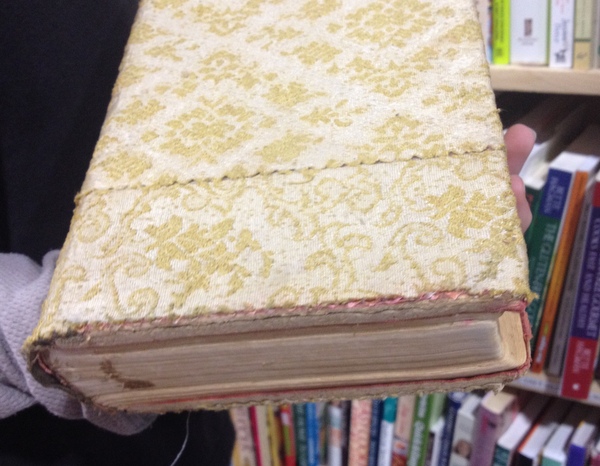 I was sure it was going to be a bible, but instead of that it's a hundred year old book about adolescent mental health with red paint (not blood, I'm sure) staining the title page. Now I'm feeling guilty about not giving in and buying it for him, but this thing is not worth three bucks, no matter how cool he thought it was.

We also saw the brightest, most ruffly crochet bunny ever. Someone worked hard on that! 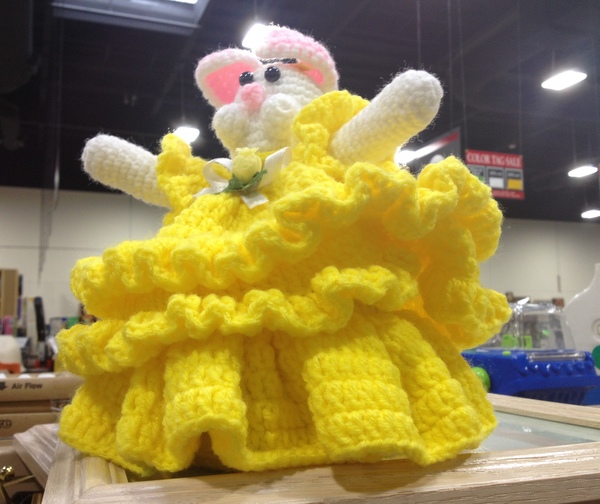 I dug through all of the craft stuff at two different stores and found two kits worth falling in love with. Realistically, I'd probably never stitch the hummingbirds and I think someone else had already started it, so that one was easy to leave behind. That mill pond, though....I really wanted that one. And I would have bought it if there'd been more to the kit than just the outside packaging and some leftover yarn. 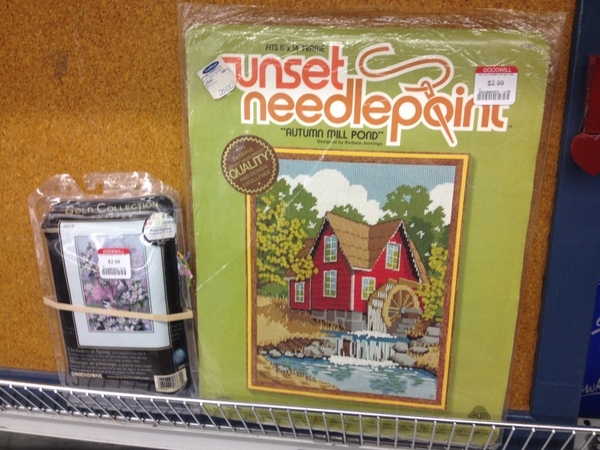 Who prices these things? That was the same shop where I found the really nice kits on Halloween for ninety-nine cents each. Today, kits that didn't contain enough to qualify as a kit were three dollars each.

A needlepoint kit that's missing the canvas is worth even less than an old psychology book covered in upholstery fabric, right?
Posted by Michelle at 4:00 AM

I love thrift store shopping! Looks like you had fun! :)

I love stopping at the thrift shop, you never know what gems you are going to find :-)

I agree, those were some interesting "finds" that could be left at the thrift shop.