Deciding to Rip Out Three Days of Shawl Knitting

Remember that shawl I showed you last week? It was half done at that point.

Now it's a completely different shawl. 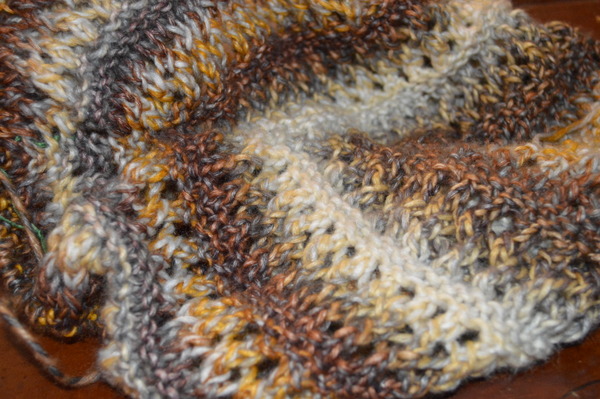 Before that happened, I was done with the stockinette section and half a repeat into the lace. Then something happened. I don't know if I knit the wrong row from the chart or just miscounted, but something went very very wrong and I couldn't make it right again.  I spent a couple of rows trying to adjust my mistakes, then unravelled the whole thing.

A safety line after the stockinette portion would have saved me from that, but I don't use the technique as often as I probably should, especially not on patterns that have been described as "perfect to memorize and knit while you're watching Netflix." The pattern was fine. Nothing about it was challenging. I just had a very off night.

There was no way I was going to knit my way through all of that stockinette again, hoping I didn't make the same mistake twice.  I found another pattern I liked and cast on for that one. A few rows in, I changed my mind and decided to do my own thing, alternating bands of very simple lace with bands of garter stitch and seed stitch.

I liked the first attempt, before things went wrong. I seriously love this second attempt! Doesn't the texture on the right look better? 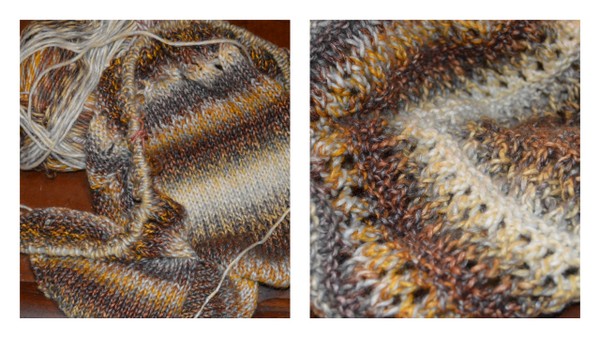 This is the second time in the past month that I've ripped out a project after spending several days on it.  A few years back, I never would've done that. The failed project would have sat in my knitting bag until the end of time.
Posted by Michelle at 4:00 AM

This reminds me of something I read on Lynne Tyler's blog: No matter how far you've gone down the wrong road, go back. I had to unravel several rounds on a sock last night because I had somehow omitted six rounds and the heel wasn't quite right. I thought about just going ahead but bit the bullet and unraveled. The end result will be much better, but it sure hurt to undo that work!

You are a braver than I. When I make a mistake, I have to find someone more skilled than I am to help me correct it so I don't have to rip all the way back to the beginning. I usually have to wait awhile till she is free, but it's worth it since I can't rip back a whole big project more than once.