I've been meaning to sew a zipper bag for my swift, especially because it spends much more time in storage than it does in use. It takes a few minutes to wind a hank of yarn into a ball and a couple of weeks to knit the project. And most of the yarn I buy isn't in hanks to begin with.

This is one of those tools that proves the "if you haven't used it in several months you don't need it" rule wrong. I don't use mine often, but when I do it's worth having. I've also used the rear view mirror of my car, my own knees, and a kid's hands to wind yarn. The swift is much easier!

If you're not a knitter, here's what it does when it's expanded -- 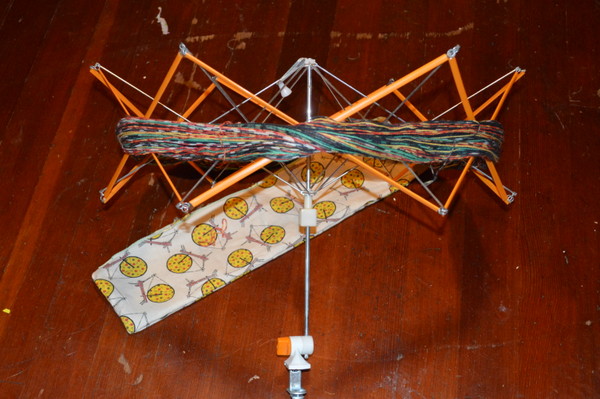 The top spins as you wind the yarn into a ball, either with a ball winder (have one, never use it) or your hands. It makes the job much faster and helps to avoid a hopelessly tangled mess of yarn. Although I've managed that even with the swift.

The bag is as simple as it gets, with three seamed sides and a long zipper. I decided a long time ago that when I did this I didn't want to be sliding the collapsed swift into the end of a long tube. All of those little ends want to  get caught on everything -- that's why it needed a storage bag in the first place.

I didn't make a lining or box the corners or anything fancy, even though it makes me feel like I'm cheating. Lier over at Ikat Bag makes a pretty convincing argument against unlined bags. It's a good thing that I skipped the lining though, because I wound up adjusting the length and width three times before I was happy. Figuring out the proper size to make a bag for an oddly shaped thing isn't one of my strong points.

The fabric is one of the oddest things I've found in my scraps to date, yellow calico spinning wheels. Just why? I like it because it's old and quirky but I'm not sure what I'd ever want to use it for besides a swift bag which won't see the light of day very often. (The bits that were left over will get chopped up and sewn into a scrap quilt so I can point at them in years to come and talk about the calico spinning wheels. They should fit right in with all of the other random bits of novelty prints.)

This post is linked to Bag It and Crazy Mom Quilts.

My mother was a bag lady, too. She even made a square zipper bag for their little square camping grill. She used pillow ticking for her bags, didn't have a serger, and never lined them. She was a knitter, too, and when Daddy wasn't available she would use the back of a straight chair to wind her yarn balls. You are in good company!

Great bag for a specific purpose. Thanks for linking up to Elm Street Quilts Bag It!

Clever! I remember holding my hands apart so my mom could wind her yarn into balls. That was a long, long time ago. Enjoy your weekend. XO