Is There Anything Scary About Sewing Machines?

This post contains some spoilers for the movie Annabelle.

Teenage Son and I have been binge watching horror movies. Friday night's choice was Annabelle, which I'd been wanting to see because I'm a sucker for scary dolls. It turned out that what fascinated me most was the sewing machine. I waited and waited for the camera to move around so I could see the front and tell whether it was a Singer 404 like the one that a blog reader gave my daughter after she made that dress. Mia, the character in the movie, does a lot of sewing although we never see what she's actually making. 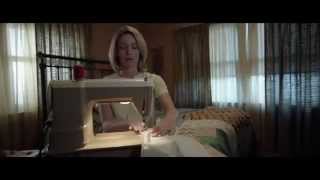 The machine is loud and the needle looks wicked and she's not holding her fingers the way I'd hold mine. So it's no surprise when she finally gets one of them in the path of the needle. I'd already Googled "what kind of sewing machine was used in Annabelle" -- because the plot was moving slowly and I really wanted to know whether I was right -- and the first results were video clips about the sewing machine scene. So I spent the rest of the movie expecting something awful to happen.

It doesn't. She hits her finger with the needle, just the same way most of us have at one time or another. She didn't get herself pinned to the machine, the way Bonnie Hunter once did and have to turn the wheel to free herself. She didn't have the tip of the needle stuck in her bone like Lori Kennedy at the Inbox Jaunt did. She bleeds just enough for it to be visible, rinses her finger in the bathroom sink, and heads back to her trusty Singer. (Which is, as best I can tell, a 404.) That confused my son, but I'm pretty sure it's what most of us quilters do. The most realistic part of the movie might be that she was so engrossed in her sewing she failed to notice her kitchen was in flames.

I think that sewing machine might have gotten more screen time than the possessed doll. In other scenes, it runs by itself. Mom's old Viking used to do that now and then, until we stopped leaving it plugged in. Again, not at all scary. At least not to this quilter.

Have you seen the movie? Did the sewing machine scene make you nervous?
Posted by Michelle at 4:00 AM

No, I haven't seen the movie, but was quite interested to read to critique. I don't find anything scary, either. When I stab a finger, I simply suck a little blood to remove any risk of contamination and continue working with the finger held high to avoid ruining the fabric. I should say I once had to turn the wheel to free myself. The needle was not in the middle of my finger, though. Just next to my thumb's nail. 😁 Thanks for writing this post. Very entertaining!