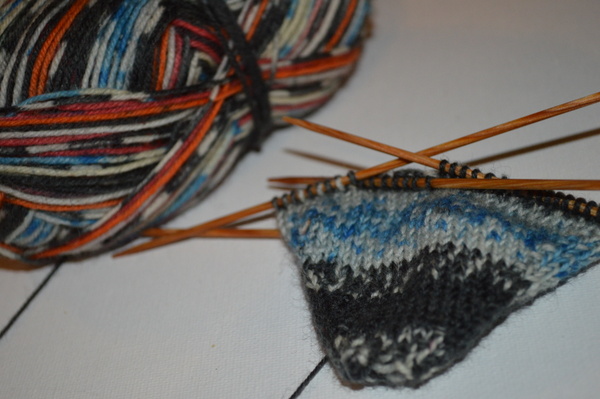 Hopefully these go quicker than that last pair. I'm anxious to get to an orange stripe because I really want to see how this knits up.

Starter House by Sonja Condit  has the same kind of scary quality that I loved so much about Rosemary's Baby. Being pregnant, especially pregnant and on bed rest, makes a woman vulnerable in a particularly uncomfortable way. An experienced teacher, Lacey is sure that she can deal with Drew, the angry little boy who haunts her new house. He's just a "noisy boy," she tells herself, not that much different than the living children she's dealt with in her classes. She's been warned that people have died in the house, and that something there hurts babies, but Lacey loves her new home and refuses to see how dangerous it is until it's too late to leave.

Disclosure -- The book came from the library. All opinions are my own. This post is linked to Patchwork Times, Yarn Along
Posted by Michelle at 4:00 AM

I think stripy socks always knit up faster. I like the colours in the yarn you're using

I'm adding that book to my to-read list! I recently finished House of Leaves and I'd like to read more spooky stuff :)