{Estate Sale Temptations} I Had to See That Couch

There's been just too much going on for us to make it to many estate sales this year. I was starting to think I'd missed the entire season, but last weekend the sun was shining and I took a look at the online ads. Two estate sales and a barn sale, all close to home...and I had to go to the grocery store for milk anyway.

So I loaded up the boys. 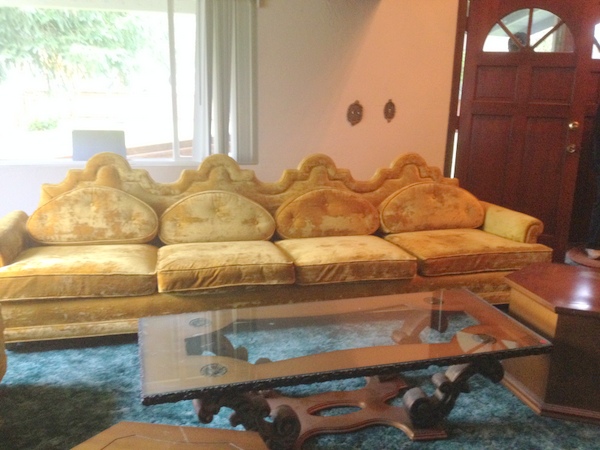 I really, really wanted to see this couch in person. It's even wilder than that zodiac couch we found at the thrift store! Seriously -- why does this thing exist? I had so many questions, including whether or not those little oval pillows were attatched or loose and what the asking price for this monstrosity and it's matching love seat was.

On Friday, we couldn't find the sale. The directions were as plain as can be, with obvious landmarks, but there was no sign where the sale was supposed to be. It's not my favorite stretch of highway and there aren't good spots to turn around in, but we still went by three times before giving up.

Saturday, I was still thinking about the couch and needed to make another grocery run, so I gave it another try. There was a sign with balloons and I got to solve the mysteries of the couch.

First of all, this thing is easily eight feet long. Probably more like ten feet. Those oval pillows are loose, which makes it the most uncomfortable looking piece of furniture I've ever seen.

The price, for the couch and love seat and those three tables you can see? FIVE HUNDRED AND FIFTY DOLLARS. But he was willing to drop it down to four hundred. It was really expensive when it was new and, the grandson of the original owner told me, no one ever sat on it. Which totally explains why all of the velvet stuff is completely worn off.

It could be a really neat statement piece for the person with the right room and some upholstery skills. I hope it doesn't wind up in the dump.

I'm still squealing over the chair, which we found at the other estate sale. The one with an address and signs. 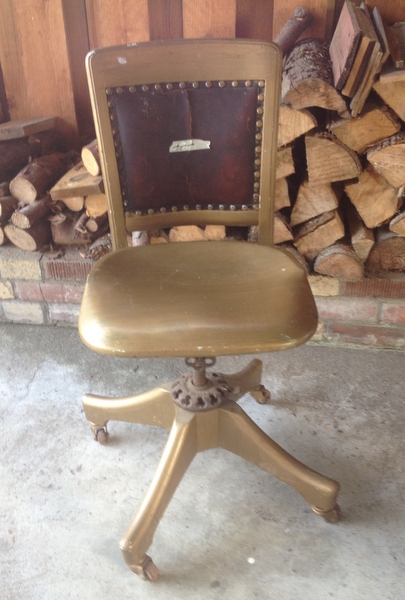 I saw it sitting in the carport and immediately plunked a boy into it with instructions not to move because if by some miracle it wasn't already sold, it was going home with us. It's in the back of my van now... 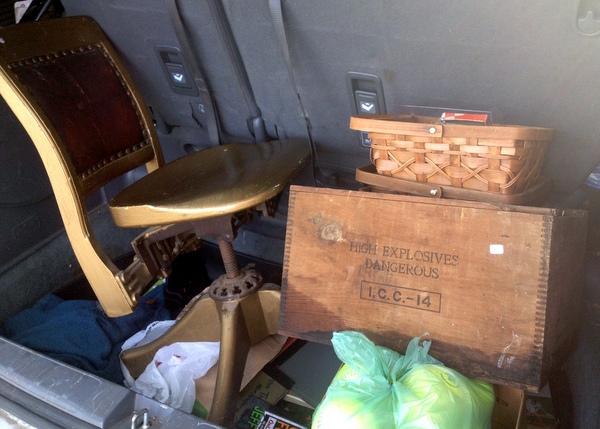 Except for the leather on the back, it's all solid wood. I don't know why it's gold, but at least they did a good job of painting it and managed to avoid all of the pretty metal hardware. I'd love to make it not-gold, but I've been wanting a chair like this ever since I saw the one Grandma tore apart and refinished. For ten bucks, I'm not going to quibble about the color. If it had been pink and sparkly and covered with stickers, I probably still would have brought it home. (Although I'm sure Teenage Son would have been less enthused about having it in his room.)

Speaking of my oldest son, he's been wanting an explosives crate probably since he learned to read and figured out that they were a thing. We see them in antique stores all the time, but they're always expensive. This one was at the barn sale and dirt cheap.  I found some nearly identical crates on Etsy for ten times what this one cost.

The seller said he started out with six of them. It's probably a good thing that he was down to the last one or my day would have been much more expensive. Because I'd kind of like a dangerous box of my own.

There was also one lone canvas bank bag. The boys are now creating a story about how someone would have a bunch of bank bags and an old box of explosives in his barn. I wish there'd been more bags, because one of those would be awesome for a zipper bag project. I'm not mean enough to fight my son for his. But I'll definitely keep my eyes open for another one!

The basket on top of the explosive box? That's one of three. They nest and have handles that fold flat and I don't know why I needed them, but I did. And once I paid for the explosives box and the bank bag and the metal first aid kit that's exactly like mine except it has it's original contents, the guy threw in my baskets.

I adore the chair and I'm happy my son got his crate, but the trip would've been it just to see that couch!
Posted by Michelle at 4:00 AM

That couch is charming ♥

What a great day. I enjoyed seeing all the goodies you bought, and that weird sofa.

What a fun day you had with your boys and you came home with some great buys. Good shopping!!