The Socks That Took Forever 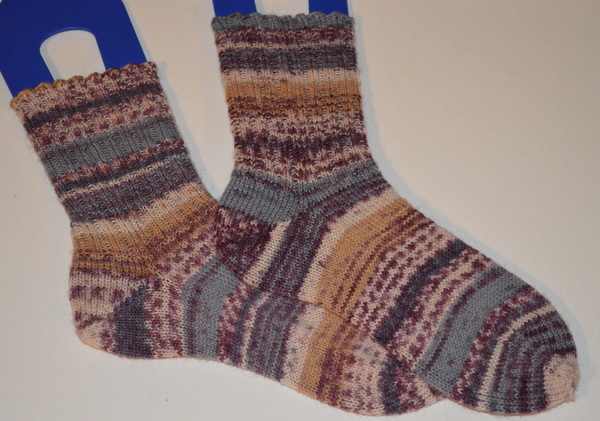 I still don't understand this pair of socks. I cast them on before the Sedona trip, assuming that they'd done in plenty of time for me to cast on a pair with Fall Night and knit on those in October.

Two and a half months later, they're finally done. I can't explain why they took so long. Two weeks is usually plenty of time for a plain pair of socks like these. Nothing went wrong. I didn't have to rip back and start over. They just dragged on forever, to the point that I think my fingers haven't quite remembered how to knit yet.

But now they're done and I've cast on with some yarn that I really love and I'm hoping things will get back to normal.

Ever have a project like that?
Posted by Michelle at 4:00 AM

Yes, I'm working on a pair now. I thought certainly they would be done by the end of October, but I'm not even down to the heel yet. What is with that? Thanks for letting me know I'm not alone. Your socks turned out very pretty

I really like your Sept scare socks. Is that pattern available?

I've always wanted to knit a pair of socks -- these are lovely!

I really like how your socks look. But I have two pair that are languishing because I find something else to fill my time. It seems that I don't like them but I really do, I just don't pick them up and finish them. ??