What Will it Do?

This yarn is pretty. I want to knit with it next. 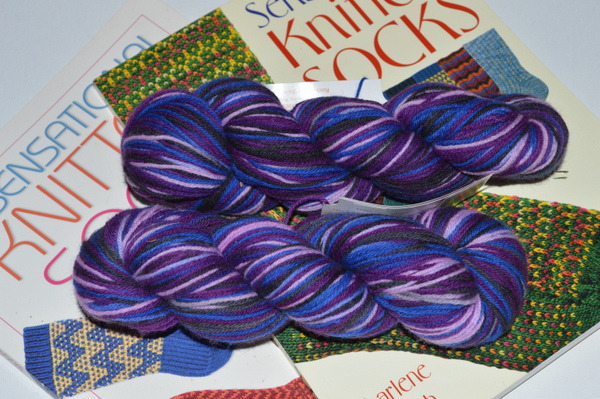 I thought I was going to knit another pair of plain socks, then I remembered that I'd decided a couple of years back that I wanted to use a textured stitch. Then I started to worry about whether or not it would pool, because some of the Knitpicks Memories did. Looking the yarn and colorway up on Ravelry didn't help much -- some socks have pooling and some don't.

Maybe I'll me a decision while I'm winding it into balls.

Making decisions about which book to read next is just as tough. I've got a bunch of titles I'm excited about starting. And a bunch I just finished...

A Composition in Murder by Larissa Reinhart

Cherry Tucker is back, this time teaching art to senior citizens who are demanding she spice things up with nude models or they'll leave her class to sign up for hot yoga. When one of the assisted living home's residents asks Cherry to witness the signing of her will, Cherry suspects that someone might be trying to take advantage of the wealthy CEO. That's exactly what the 90 year old was planning on and she urges Cherry to investigate the hit and run accident that left her daughter dead. Cherry's personal life is always complicated and if you've been keeping up with the series you absolutely won't want to miss this one.

This one felt like a run of the mill teen thriller until the ending blind-sided me. I thought  I had an idea what was coming, but I was totally wrong. Now I'm trying to decide whether an unexpected ending is enough to make me recommend a book that was otherwise just okay. It's an entertaining read, but not the best thriller I've read lately.

At first I couldn't remember what I'd liked so much about new real estate agent Sam Turner in the first book of the series, but then she hosted what has to be the most catastrophic open house ever and I was hooked again. Poor Sam is already struggling to provide for herself and her teenage son -- and the bodies that keep turning up in the house she's trying to sell aren't making her situation any easier. She goes to some crazy lengths to solve the mystery, but she's desperate to save her job. The mystery kept me guessing Sam and the cast of colorful secondary characters kept me giggling.  And I love Sam's relationship with her son -- none of the usual maternal griping about teenagers here!

Disclosure -- I was provided with an advance review copies by the publishers. All opinions are my own. This post is linked to Patchwork Times, Yarn Along,
Posted by Michelle at 4:00 AM

Hi I am a novice knitter what is pooling? I've tried looking it up and now know a lot about swimming pools but nothing about knitting pools

Thanks for the shout out, Michelle!