It's time again for the Blogger's Quilt Festival.

I've been having so much fun with my embroidery this year that I decided to link up Black and White Appliances.  This is the only embroidered quilt that I've actually finished, so it's the one I'm posting. Still in progress, I've got the Anatomy quilt, the Garden Party quilt, and a redwork kitchen quilt. And Hocuspocusville. How could I forget that one, especially with October so close? 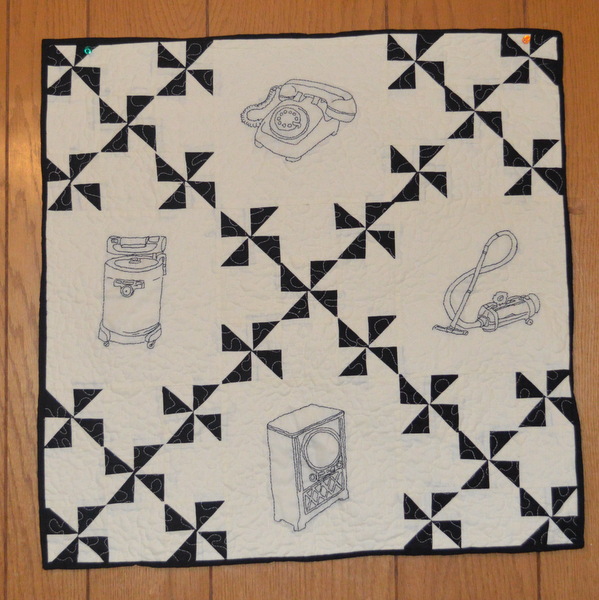 These are the sort of appliances you don't see much any more except in old black and white movies and television shows...and stitching them in black meant that I didn't have to choose realistic colors and still somehow make all of the blocks look good together. Building on that idea, I had a piece of fabric in my stash that's white on white with little dots. The dots made me think of static, which fits with the whole "black and white television" idea. So that was my background fabric. I think the black is what was left over from the nail polish quilt, fabric which was originally purchased for something else entirely.

My family owned an appliance store when I was growing up and I love the look of old television sets -- although the one depicted here is way before my time.

I've got a washing machine that's similar to this one out in the barn. The friend who sold it to us says it worked the last time she used it. It's my backup plan for the next time the "real" one gives out.

We had a telephone similar to this one (ours had buttons, otherwise the shape and style were the same.) I had to give up on it when it stopped ringing, but while it worked it was my favorite phone ever. You could actually hear it from across the house! That's why I replaced our cordless phone with the old one. My last cell phone had a ring tone that sounded just like it, which was wonderful unless I was watching old movies or Perry Mason reruns.

No pattern for this one -- I bought the embroidery patterns at Grandma's Attic last spring. There were others available, but these were the four I couldn't live without and thought would make the cutest quilt. The blocks are 9" finished and I made the pinwheels with my Easy Angle ruler and 2" strips of fabric.
Posted by Michelle at 9:00 PM

This is a super cute quilt. I love the embroidery!! Thanks for sharing it with us!

Love all the details in your quilt! The phone takes me back to when I was a kid :)

Love these old appliances. The look beautiful embroidered. Glad you share with us!

What fun. I love the embroidery.