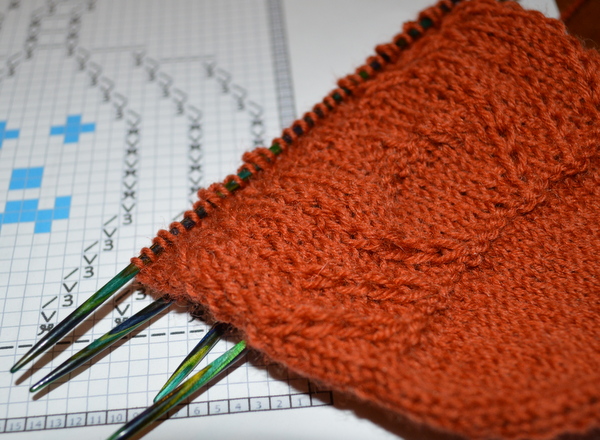 When I saw the chart for the second September Scare clue, my first reaction was "not gonna happen." Then I started to see pictures of what the other knitters were doing and it looked really pretty and I already had the toes done from clue #1, so I figured I might as well give it a shot.

The knitting is way easier than the chart looks, elongated stitches that travel a bit and are easy to keep track of. I'd hoped to have one  sock's worth done by the time clue #3 came out, but I'm having a whopper of an allergic reaction and spent yesterday first trying not to pass out in the Urgent Care waiting room and then home sleeping.  I've never had anything like this before -- red welts from head to toe, swollen face, swollen and throbbing wrists (which forced the no knitting part.)

The doctor says that most of  the time people never figure out what triggered it. There's absolutely nothing new in my life to blame, but I'm looking around my house and hoping that whatever it was isn't waiting for me to get into it again.

Music City Salvage needs a big job, one that will get the family business back onto stable footing. The Withrow house looks like exactly that, in pictures at least, so the owner scrapes together the cash for the purchase and sends his daughter and her crew to start pulling down everything they can sell. Leaded windows...marble fireplaces...copper roofing... the house exceeds their wildest expectations.

Because the characters spend all of their time in old houses, there's no discussion of whether or not ghosts are real. They take their existence for granted and don't panic once things start to happen. For them, it's all part of the job. They're troubled when they discover an unmarked cemetery on the property but that's just a Halloween prank dating to the last century, unclaimed stones made by the the family business a century earlier. The graves aren't real. Even after Dahlia and her crew realize that whatever spirits linger in the Withrow House are different and more dangerous than what they've encountered on previous jobs, they just turn on every light and stick together. They can't afford to leave the job unfinished.

The Family Plot by Cherie Priest is a genuinely scary haunted house novel. I can't tell you the last time a book made me think twice about pulling back my shower curtain and turning on the water. (Actually I guess I can -- but it wasn't a book, it was the made for television version of The Shining twenty years ago.)  If you like scary stuff, I can't recommend this one enough.

Disclosure -- I was provided with an advance review copy by the publisher. All opinions are my own. This post is linked to Patchwork Times, Yarn Along,
Posted by Michelle at 7:26 PM

That book sounds REALLY good - thanks for the recommendation. I noticed it doesn't come out until September 20th? Lucky you getting an advanced copy!