{Garage Sale Temptations} I needed those! 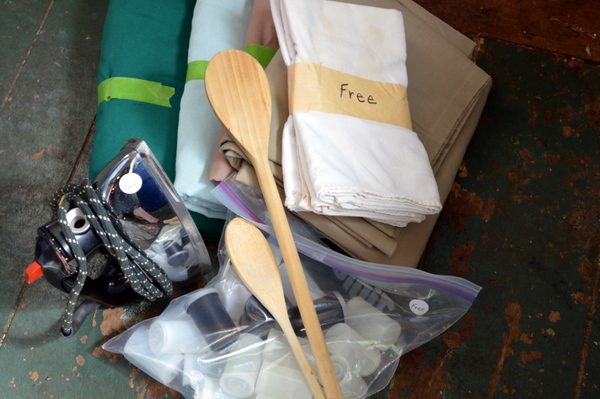 Last weekend, Hubby and I headed off to the movies. We made it out of our driveway and down to the stop sign before we were sidetracked by a garage sale sign. It was pointing to the top of a hill I haven't gone up before. The houses up there are newer, and nice...but we had a couple of minutes to spare...

While Bill got a great deal on a lawn mower, I wandered into the garage. They didn't have a lot of stuff and none of it was particularly old or interesting, but I saw the flour sack towels. They're not perfect, but from what I could see without undoing the tape, they're better than most of the ones I've been using. I'll clean them up and they'll either go into the kitchen or add some variety to the fabrics I'm using for the Garden Party embroidery quilt.

Then I saw the empty film canisters. I've been looking for some for a science project with no luck. Now I've got more than I need -- and did you see those prices?

The flat sheets were a dollar each. The brown ones are probably going to be backgrounds for scrap quilts. (Starting with Saddle Tramp, if I don't change my mind.)  The dark green one is fitted and will go on a bed. As for the light blue one, I haven't made up my mind yet. It might go on a bed or might be used up for free motion quilting practice.

I have a hard time walking away form old wooden spoons, so I picked the ones I liked best. What's thirty-five cents worth of spoons when you add them to a lawnmower purchase?

They were still starting up the lawnmower and talking about its finer points, so I wandered over to the free box at the end of the driveway and found myself an iron. I asked the gal if it worked and she told me that it works great, she just refuses to buy anything that needs ironing and doesn't need it anymore.

When I was paying for our stuff, she told me how she'd had the idea of scattering free things through the sale so that people would look through everything. It's a neat idea -- but I would've paid for the flour sack towels and film canisters!
Posted by Michelle at 4:00 AM

What great bargains! I love the Saddle Tramp quilt too and hope to make it someday. It's one on a long list...

My mom used to have that same iron. You managed some great finds. I love the free items.

Great buys and freebies. I used an iron just like that one for maybe 20 years. If it's the Black & Decker brand. It was a great iron, and heavy enough to do the work, so I didn't have to.