{Yarn Along} Wrestling the Squid -- I think I'm winning!

The arms are joined and the underside is done. Now I'm working on the head. 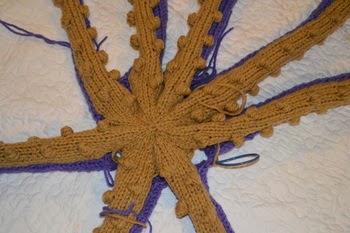 Do you figure out in advance how much a project is going to cost? This one has crept up on me. I bought yarn...then more yarn....then the big bag of stuffing.... I didn't keep  track of the actual numbers, but I'm thinking that if I'd realized how much this project was going to cost, I might've thought twice before buying those first skeins of yarn.

If I'd read the pattern in advance, I definitely would have been scared off! But it's been kind of fun, and it's been keeping my mind occupied and if I ever had the right time to tackle a project like this one, it was now.

by Sandra Brown a pediatrician training for a marathon disappears from an isolated mountain trail. Her husband waits a little longer than he should before calling the authorities, which makes him a suspect. When she awakens with a concussion, she's being held in the cabin of a man who will tell her nothing about himself, not even his name, and refuses to drive her down off of the mountain.  This sounds a lot like some of the other suspense novels I've been reading lately, but it's romantic suspense and playing by a different set of rules. There were some bits that just bugged me -- the heroine takes "analgesic tablets" instead of anything specific, and there are some awkward twists to avoid brand names, but I had a hard time putting the book down because I really wanted to know where the  characters would all end up.


For more fun projects to drool over, check out On the Needles at Patchwork Times and

Disclosure - the publisher provided me with an ARC.
Posted by Michelle at 4:00 AM