Self-striping sock yarn can fun. It does pretty things while you just knit in mindless circles. Sometimes, it does things you'd rather it didn't do. 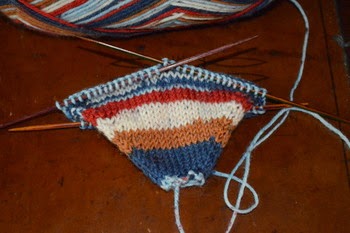 This is ugly. I didn't like those big clunky stripes. I liked it even less once I saw that I was hitting a stretch of narrow stripes.
The stripes at the toe are always going to be wider than the stripes on the foot and leg because there are fewer stitches in each round. I took a chance and cut the yarn, starting the toe over with those shorter blue lengths of color. And it came out SO much better! 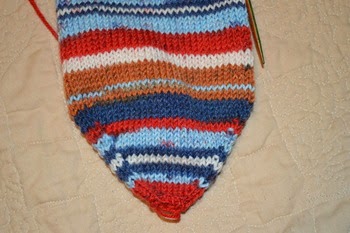 I had a limited amount of this yarn (Magic Stripes comes in a skein of 330 yards) and I didn't know if I'd be able to manage the same trick when it was time to start the second sock.  But once I knew which part of the repeat I was looking for, it was easy.

These are much cuter than I expected them to be based on that first toe. Teenage Daughter had dubbed them "sock monkey colored socks" and since she's much more excited about this yarn than I am, they're now hers. 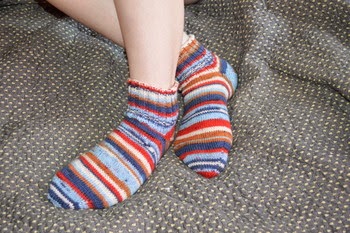 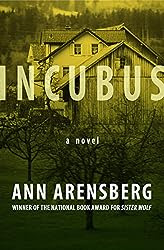 I finally got a chance to finish reading Incubus

by Ann Arensberg. The book is set in 1975 and it reads like it was written back then. It unfolds gradually and I had to find some distraction-free reading time to really get into the plot.

Here's the description from Amazon:

It begins with the theft of six candles from the church altar, a few herbs found strewn in the local graveyard. In the summer of 1974, the prosperous farming community of Dry Falls, Maine, is hit by a brutal heat wave. Crops fail. Drought blights once-verdant lawns. Men inexplicably lose all interest in sex, while women complain of erotic nocturnal visitations. Farm animals give birth to monstrosities. An unholy, unimaginable force is disrupting the natural order—and it seems to be specifically targeting Dry Falls.
Narrated by the careful and practical Cora Whitman, wife of the town pastor, this tale of creeping strangeness quickly turns sinister. Incubus subtly builds to its shattering climax with Cora at its epicenter. Expertly interweaving themes of faith, religion, and marriage with that of the supernatural, this modern horror classic will enthrall fans of Ann Arensberg and attract a legion of new readers.

The narrator, Cora, writes a newspaper column about gardening. It's interesting to watch her turn those talents to tell the story of her husband's studies into the supernatural. (A bit of warning here -- this book is very graphic when it comes to the sexual elements. Cora is detached and clinical, but there's still a lot of detail.)


For more fun projects to drool over, check out On the Needles at Patchwork Times and Work in Progress Wednesdays at Tami's Amis.

Disclosure -- the publisher provided me with a review copy.
Posted by Michelle at 4:00 AM

I know there are lots of sock patterns out there, but what is your fall back, or default pattern? I'm just amazed at how many you make! Cheers!

They came out great with your modifications. I made a pair for my nephew with the same yarn and I wish I had done the same as you did.

I think you definitely improved those socks by restarting the toe, it makes such a difference.