Barbie Used to Have MUCH Cooler Stuff!

I firmly believe that the first generation of Barbies had the absolute best stuff, but there were still some neat things coming out when I was a kid. Like the Barbie Dream Boat:

Mine came from the thrift shop and was missing some of the original accessories, but I never cared. I was too busy loving the little details like the engine room... 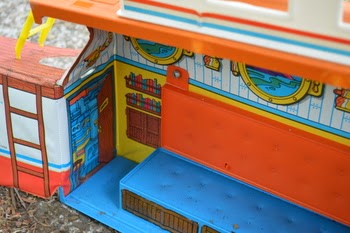 And the hurricane lamps and bookshelves... 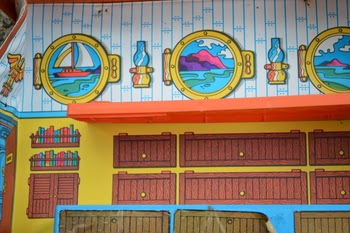 And the spice racks and pipes under the sink. Does it look to anyone else like Barbie might've had some Pyrex in there? 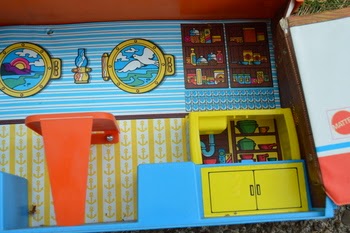 It makes me wonder when it was decided that absolutely everything associated with Barbie had to be pink, as opposed to actual colors found in the real world. (Except those views out the porthole....those are a bit too vivid, aren't they?) They used to make better toys. Look at how it all folds up to go on a closet shelf with room for some dolls and their clothes inside. 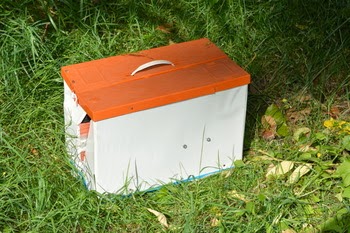 My most vivid memory of playing with Barbie and her boat is of playing with it down on the river and having a friend of Dad's telling me that it was a Chris Craft, so Barbie had a really good boat. I was so proud of that!

This post is linked to Vintage Thingie Thursday, Thriftasaurus, Share Your Cup, Ivy and Elephants, We Call it Olde, Savvy Southern Style, Thrifter Maker Fixer.
Posted by Michelle at 4:00 AM

That's cool...I had a Barbie camper. It was awesome! I wish I kept it. I wonder if those are still around?

I think they have the ship because the show "The Love Boat" was out. I never got the ship.

Tea in the Library said...

this is the first time I've seen the ship. How cool. I agree about the 1st generation - I was lucky enough to have a friend with a big sister just the right age to have passed down loads of 1st generation Barbie. I loved the cardboard house!

Even the Barbie stuff was more charming before...

Love that he said it was a Chris Craft! I don't remember the boat, but I had a super cool car and my middle daughter had a groovy van! Thanks for sharing with SYC.
hugs,
Jann