The Educational Value of Estate Sales

I love estate sales, especially the ones where you can tell that the people lived in the house for years and years and raised a family and grew old there. It's so much fun to explore basements and barns and outbuildings. I couldn't get pictures of the barn and kitchen because there were so many people milling around, but this shot of a back room in the basement gives you an idea. It was a mid-century house with one of those amazing basements that just went on and on. 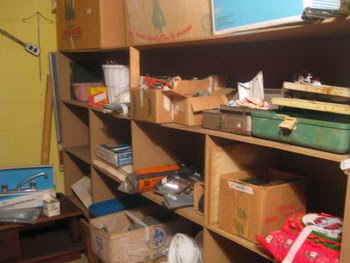 I love this old freezer....I'd love to have the kind of basement it would take to store a monster like this. In reality, I'm a little scared of my modern chest freezer, so I wouldn't really want to have something like this in a house with small children. But that doesn't stop me from daydreaming. 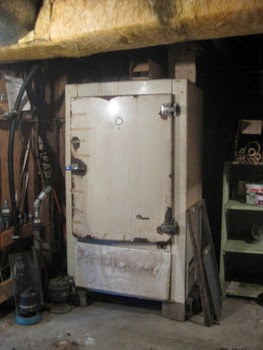 The boys were full of questions and I found myself trying to explain the full size craps table in the carport which I didn't understand myself. Who has one of  those? Who's going to buy it?

A helpful old man explained the pedal powered grinding stone in the barn. (I did understand that one, but he stepped in before I could start on my own answer.)

Why would someone tape books around their pipes? That boggled my youngest boy's mind until I told him that it was probably to keep the pipes from freezing. "Oh, you mean it's like insulation?" Um, yeah. That's the word I probably wanted. 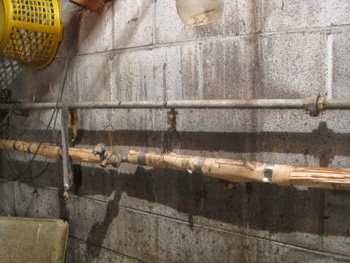 And can someone please tell me what this type of decoration is called? I know it's vintage and I know that someone near and dear to me had this type of stuff when I was growing up. But no one can tell me who....probably because I don't have the right terms to describe it. 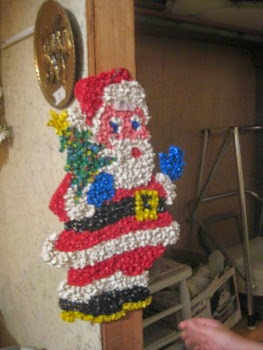 When we first moved down here, I found an estate sale with a ton of Halloween decorations. I didn't have a lot of extra cash in my purse and decided to take my chances and come back on half price day. Of course they'd been snapped up. I'm telling myself that it's not a big loss since I probably wouldn't hang them in my own house.

What did we bring home from this sale? A lot of fun new knowledge about old stuff for the boys and a copy of Ginny Gordon and the Lending Library, a vintage mystery that I had as a kid and have been wanting to replace.

This post is linked to Vintage Thingie Thursday, Thriftasaurus, Share Your Cup, Ivy and Elephants, We Call it Olde, Savvy Southern Style, Thrifter Maker Fixer.
Posted by Michelle at 4:00 AM

How interesting. What a nice way to describe someone's life by the items they leave behind!

That looks like decorations we had maybe 20 or so years ago (might even be longer). They were made of some kind of plastic chips that seem to have been melted together on a metal sheet or something similar. I do remember them being very uneven on the front and perfectly flat on the back side. I also remember them in lots of different designs and there being a small hole on the top so you could hang it from a hook or nail.

Sounds like a fun time! I love snooping around estate sales.

Tea in the Library said...

I agree the freezer IS both fascinating and scary. Sounds like a fun day with the kids.

That freezer is a classic! Never really thought about how educational estate sales are, but you are so right! Love that the little guy was so smart and used the word insulation. Wish I would have been there to nab the grinding stone. Thanks for sharing with SYc.
hugs,
Jann