Proof That I Can Knit Sweaters!

When I posted about the accidentally ugly sweaters back in December, my plan was to quickly follow up that post with another one that proved I actually do know what I'm doing. These are my favorites of the sweaters I've knit for my kids.

I was never, ever, not in a million years going to knit a giant Intarsia animal on anything...until I saw this pattern for Farm Freshin a book. I learned Intarsia just so I could make this sweater. 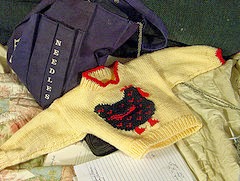 Chaos is probably one of the crazier things I've ever knit. The pattern has you roll a die and, based on what number you get, you twist your cables to the left or to the right. 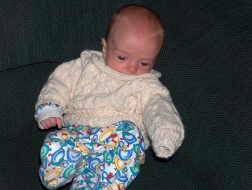 Sunshine Pullover isn't anything amazing, but it fit! (Yes, those are chickens on the porch. No, I have no idea what my son is holding in his hand.) 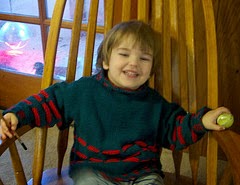 Alex's Briar Rose Raglan started out as a pattern from Knitty, then I made the decision to knit it in the round and add the picot bind-off, which Alex still refers to as "those macaroni things." She never did like this sweater, but this post is about projects that I'm happy with. 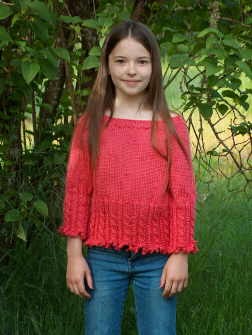 We both liked that Aqua Acrylic cardigan I made for her. The yarn was originally supposed to be something for the boys, but I reserve the right to change my mind at any point after purchasing it. 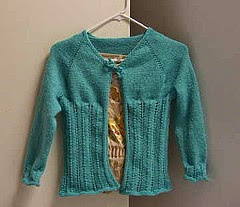 It's an H! is the one really good sweater I've made for Heath. Intaria H's are far easier than Intarsia chickens. And both of those are easier than charting the "S" I needed for my daughter's Weasley Sweater. 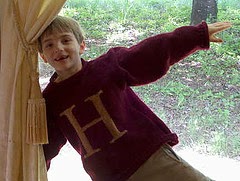 It's been a long time since I finished a sweater, good or ugly. I don't know why I was so skittish about working on the new one for Alex, since it's a clone of the one I made for Heath (except for that "S" -- and I'm done with that part.)

Do you lose your nerve when it comes to something you haven't done in a while?
Posted by Michelle at 4:00 AM

Since I can't knit a stitch I'm super impressed with any sweater ugly or not and all of these look mighty nice to me!

I am impressed that you can knit such cute and complicated sweaters. I'm still having trouble making socks because I keep messing up on a pattern row and don't realize it until much later. By then, I have no idea how to fix it, and heaven help me if I have to rip back to that mistake. THEN it's real trouble. You are much braver than I.