{Yarn Along} The Murder Pit

What's black and white and red all over and really, really boring? 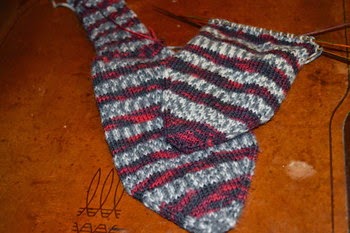 I was convinced that this is the most predictable and boring self-striping sock yarn ever. Right up to the point where I laid them out to take the picture and realized that the socks look like my two skeins were from different dye lots.

Not much I can do about it at this point except finish the second sock. At least I'm using up old stash, right?

When I decided to read The Murder Pit

by Jeff Shelby, it was because the heroine, Daisy Savage, finds a corpse in the coal chute of her hundred-year-old home. Old houses with bodies hidden in the walls, as long as they're the fictional kind, always intrigue me. I didn't realize until I got into the book that Daisy is a homeschooling mom of four. She's not a detective, even if she did do a unit study on forensics with her kids a while back, but she's being snubbed by the members of their local homeschooling co-op because no one wants their kids in her classes. Everyone in town knows that she dated the victim before marrying her husband and most of her neighbors seem to think there was a lot more to that one date and that she must've had something to do with his presence in her house.

I was glad to see that there's a second book in the series coming soon, because I can't wait to read more about Daisy and her family.

For more fun projects to drool over, check out On the Needles at Patchwork Times and Work in Progress Wednesdays at Tami's Amis.  And in case you're interested in The Boy Who Could See Demons

, one of the books I was gushing about last summer, it's currently $1.99 for the Kindle Edition.

Disclosure - The publisher provided me with an ARC.
Posted by Michelle at 4:00 AM

They may be boring to knit but your socks are interesting to look at. It sounds like your book is quite interesting also. I will have to add it to my reading list.

I couldn't even tell they were from different dye lots. They look great so far!

I don't even think it matters if the colours are off - odd socks are great! The book sounds interesting.

I also love that there are more books with homeschooling kids and families in them. I will look for that book at our library. :)