Just a sleeve and two seams to go, and I'll be able to cross another one of the big green projects off my WIP list.  It's going quickly, so maybe Teenage Daughter will have her Slytherin sweater to wear before it gets too hot for it to be useful. 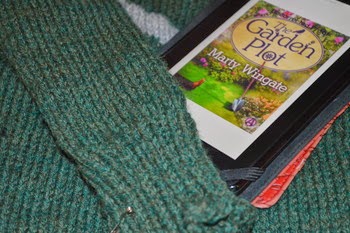 is the first Potting Shed Mystery by Marty Wingate. Here's the book's description from Amazon:

Pru Parke always dreamed of living in England. And after the Dallas native follows an impulse and moves to London, she can’t imagine ever leaving—though she has yet to find a plum position as a head gardener. Now, as the sublet on her flat nears its end, the threat of forced departure looms. Determined to stay in her beloved adopted country, Pru takes small, private gardening jobs throughout the city.

On one such gig in Chelsea, she makes an extraordinary find. Digging in the soil of a potting shed, Pru uncovers an ancient Roman mosaic. But enthusiasm over her discovery is soon dampened when, two days later, she finds in the same spot a man’s bludgeoned corpse. As the London police swarm her worksite, ever inquisitive Pru can’t quite manage to distance herself from the investigation—much to the dismay of stern Detective Chief Inspector Christopher Pearse. It seems that, much as he tries, even handsome DCI Pearse can’t keep Pru safe from a brutal killer who thinks she’s already dug up too much.

I really enjoyed this book. I was really rooting for Pru to find her dream job. Horticulture isn't something I give a lot of thought to, but author Marty Wingate got me interested in digging and pruning. Not quite interested enough to tackle the blackberries running riot over the far edges of our own property...but I will be eagerly waiting for the next book in the series.


For more fun projects to drool over, check out On the Needles at Patchwork Times and Work in Progress Wednesdays at Tami's Amis.

Disclosure - The publisher provided me with an ARC.
Posted by Michelle at 4:00 AM

I was just wishing I had access to blackberries! I really want to make some jam. Enjoy!