A few weeks ago, we lost all but one of our ten chickens. Over the course of a day or two, our little flock went from ten to three. A couple of days later, we were down to one lone barred rock hen. It has to have been a predator, but beyond that we don't know for sure what happened.

I couldn't figure out what to do with the hen, except to keep feeding her and hope she was happy enough. She's abandoned the coop and spends her nights in a tree.

One lone chicken just seemed so sad.  I was still trying to decide what to do about her when she showed up by the front porch with a new friend. She found herself a rooster -- and one that's the same breed. It's so cute to watch them wander around together. 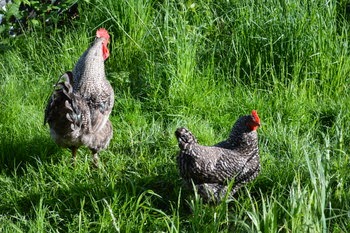 I was hoping he'd stay, or that she'd follow him back wherever he came from. We finally got a chance to talk to the closest neighbor. He is their rooster and the two of them apparently spend their early mornings across the road and the rest of the time wandering around on our place looking adorable.

(And the neighbor has been dispatching a slew of chicken eating critters on his side of the road. He's lost more birds lately than we have. I'm hoping that included whatever got our chickens and rooster.)
Posted by Michelle at 4:00 AM

UGH...are you going to get more or do you have enough going on right now??

I hate hearing that! Hope the predator is gone and you're able to rebuild your flock.