Tricking Myself into Getting Something Done

Instead of writing a blog post last night, I decided to get the leftover floss from Stomehearth Hutch wound onto bobbins so I can return it to my stash once the backstitching is done.  It was mindless stuff that's going to need to happen sooner or later and it let me convince myself that I was doing something productive. 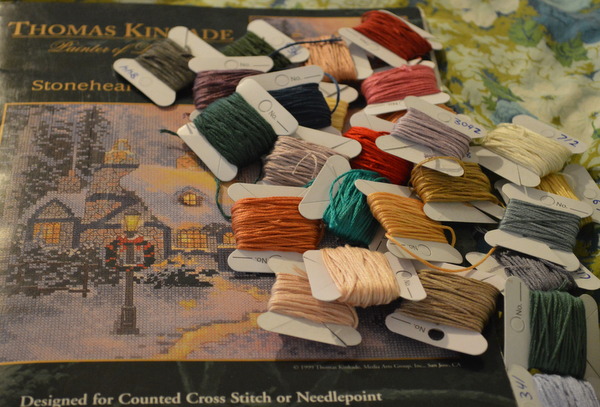 I left out the colors that I'd be using for backstitching and once everything else was wound I went through those colors one by one. There was a shade of red that's only used to outline the bow of the wreath. So I got that part stitched. There's a shade that's used for the green part of the wreath. I decided not to "accent faint tree in background between first two left chimneys," mostly because I wasn't quite sure what that meant.

Now all that's left is the last of the stonework. That won't be quick, but it sounds like a lot less work than "all of the backstitching."
Posted by Michelle at 4:58 PM