{I've Been Reading} Widow's Point and We Sold Our Souls

I haven't done a lot of knitting or stitching over the past couple of weeks, but I've made my way through a lot of books. 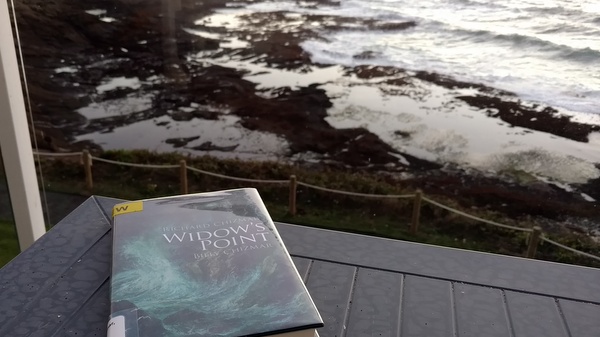 I read Widow's Point by Richard Chizmar and Billy Chizmar while we were still at the coast and it was the perfect choice to curl up in front of the fireplace with while it was starting to get dark and I could hear the waves crashing outside the condo. The Widow's Point lighthouse has been locked behind security fences, totally off limits to everyone since the last in a long string of tragedies occurred in 1998. Then the well known author of thirteen bestselling books about the supernatural makes arrangements to have himself locked in the lighthouse for a weekend.

The story unfolds as if we're watching the footage that Thomas Livingston filmed during his time at Widow's Point. Imagine Stephen King's 1408 set in a haunted lighthouse instead of a haunted hotel room. It's spooky stuff that will give you some fun chills. This novella is a fast read so I would've opted for the Kindle edition instead of the hardback -- if I hadn't stumbled across it at the local library.

I think I've read and enjoyed everything by Grady Hendrix so far. I loved the one about the haunted Ikea and the one set in the Satanic Panic of the 1980s so I was waiting for We Sold Our Souls to come out. This one is set in the world of heavy metal and even though I'm not a fan of any of the bands he mentioned that didn't stop me from enjoying the book. I even recognized most of the songs the characters mentioned. The book is scary, and pretty bleak. If you want something to cheer you up or distract you from sad things, this isn't going to be a good choice, but if you want something seriously creepy pick this one up.