Apparently, boys never outgrow the need to go outside and check for snakes. I told you about the piece of metal flashing they put out on the lawn to attract them. That's not working this year.

Now, the snake spot of choice is the burn pile. I got called out because there was a pile of them coiled so tightly together they supposedly looked like a three-headed snake. All but one we gone by the time I came with the camera. 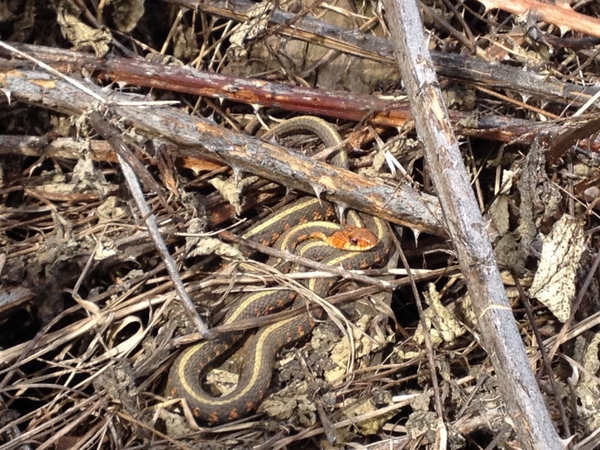 They aren't in this picture, but there were at least seven littler snakes making their ways through the tangle of dried up blackberry vines and occasionally poking their heads out. It was as cute as snakes can possibly be.

My husband has been forbidden to burn any of this until we're sure the snakes have moved on. Or until he figures out how to get the snakes out.
Posted by Michelle at 4:00 AM

It would seem if you start burning the pile, the snakes would high tail it outta there! Just don't let them come over to my neck of the woods, lol! (What kind are they?)

I'm in the West side of the Willamette Valley and I make small 3 foot wide by 2 ft high "stacked" piles of orchard trimmings for the garter snakes. I have not had a slug problem for years!

I'm with Barb. You can keep your snakes in your yard and I'll just look at your pretty pictures. :) I know there are good ones for the garden, but I can't tell which are good and which are not most times -- especially when I'm running the other way.!

So it sounds like we've accidentally done what Joni does on purpose and made an attractive home for our snakes. We're in the Cascade foothills, across the valley from her. I really don't mind them much -- with four acres there's a lot of space for them and me and I've got a fairly good idea where they're likely to be so they rarely surprise me. That six foot gopher snake I found stretched across the driveway once while I was bringing in the groceries sent me running and screaming.