Everyone is Going to Hobby Lobby

For a few weeks now, I've been seeing Hobby Lobby clearance hauls on Youtube. I'd looked at our local store, but there was nothing I needed. Then the needlework finds started to pop up on Facebook stitching groups.  I stopped at the Albany store on my birthday, but nothing was marked down. Later that afternoon, we stopped at the Salem store.

I found what I was hoping for... 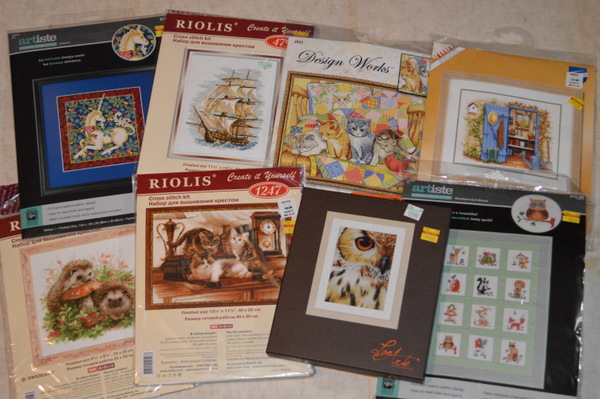 Those kittens in the top row? I almost bought them with a 40% off coupon back in December and now I'm very glad I didn't. Those kits were all 75% off. The stamped quilt in the lower right hand corner was $3.25.  And there were soooo many other kits that I didn't pick because I was trying to exercise some self discipline (and I didn't absolutely adore them -- if they'd made my heart go pitty pat they would be in the above picture because if the needlework kits are 75% off and I've got birthday money to spend, it's not the time to be overly careful about purchases.)

I found cheap scissors to tuck into my project bags and cute dish towels with blank spaces to embroider. I'm still deciding whether to stitch on those or just use them the way they are. That red alligator print thing is a magnetic pattern holder. 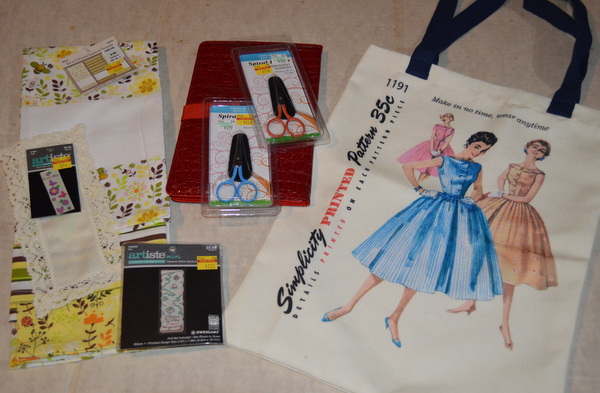 The canvas tote bag wasn't on clearance but I had a coupon and I absolutely love it.

From what I'm seeing on the stitching groups, different stores are marking things down at different times. No one, including the employees I asked, seems to know if they're doing away with the cross stitch or making room for new stuff.
Posted by Michelle at 4:00 AM

I did not even know they had a Hobby Lobby in Salem. I may have to take a road trip.

Our Hobby Lobby is over an hour away. :( If I'm up that way I'll check it out.

That dress pattern--where did that come from?
I went looking for cross stitch kits last week so I could introduce a friend to cross stitch. It took me three stores to find an iron-on transfer alphabet that had a good sized X pattern that she will be able to see, even with her glasses. Counted cross stitch is not something for a beginner to start on. So many patterns just had outline stitching, lazy daisy, and satin stitch. She wanted cross stitch.
Your sets of cross stitch look very interesting! (But still too difficult for my tastes)