{Estate Sale Temptations} All the Memories

Last Thursday, Hubby and I stopped at an estate sale. We bought a hand truck for our daughter (because what twenty-one year old doesn't have that item her wish list?) and a Better Homes and Garden cookbook from the 1950s and that was it.

There was an entire bedroom full of yarn. It was (relatively) clean and well organized and all of it was priced above Joanns or Michaels sale prices.  There was also a sign saying that stuff would be three dollars a bag full starting at noon on Saturday.

We got there at 11:52.  Maybe the yarn had been picked over, or maybe I was being more discriminating...or maybe the other woman in the room had grabbed the best stuff quickly... I picked up a couple of skeins that I'd spotted on our previous visit and headed for were the knitting notions. All of the stitch holders and stitch markers and crochet hooks went into my bag...along with the four zippers because the by-the-bag pricing made them pretty much free. 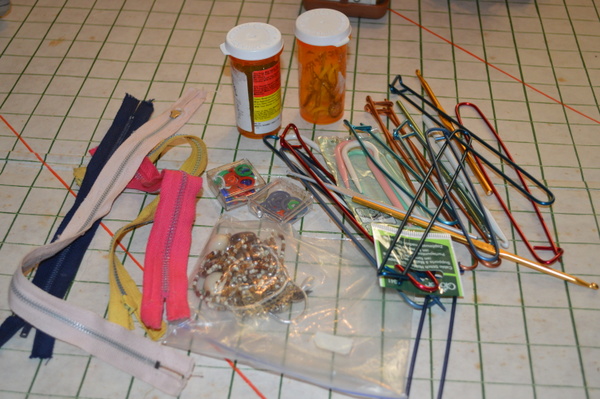 I have knitting notions, but they're never in the bag I'm using at the time. I've been to Walmart and Joanns and the Knitpicks website and they add up quickly. A couple of bucks for the markers, a couple of bucks for the cable needles... I wind up going back home to dig for what I've already got. These are going into that stash of sewing notions that I bought a few months ago and hopefully the next time I need one I'll remember that it's there.

I did get some yarn, and an armload of cross stitch magazines. They're old, but they slid neatly into the bag beside the yarn. The embroidery has a definite estate sale smell that I'm hoping will wash out. 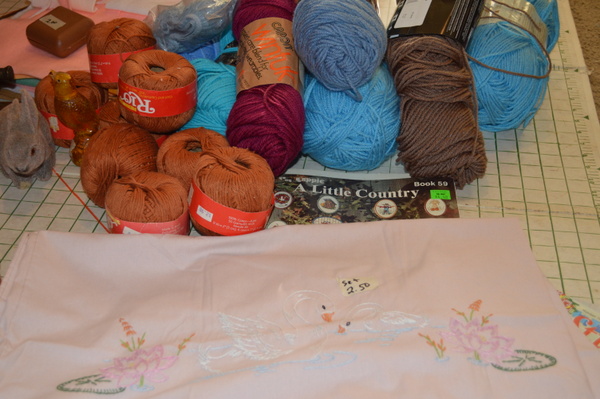 Then we went out into the front of the house. When my husband and I were first married, we had these ginormous lamps that I absolutely loved. Like this one, only blood red and rounder. They got broken during a move and I've missed them ever since. 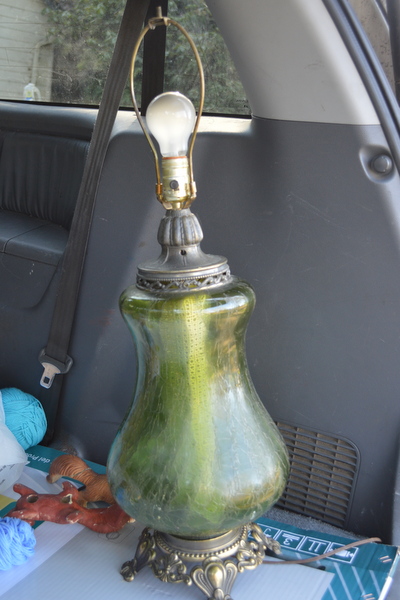 My middle son fell in love with the lamp and, for four bucks, he can have it in his room. Mostly because I love it even more than he does. 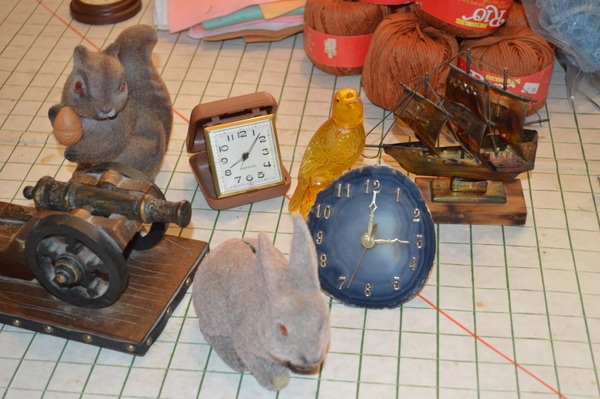 It took a little while for the boys to catch on to the fact that all of the bric a brac was fair game. I thought I'd explained the concept, but apparently not. Another man there was urging his kids to grab up anything they wanted and I was trying to be a little more tactful than that... but this was the sale where I was willing to buy a dusty metal model of  the Santa Maria and a cannon. And a folding metal camping toaster because my son was so baffled by the concept. (Wish me luck with that one because now I've got to demonstrate it!)

We knew that the game boy wouldn't work but might be useful for parts, and the games aren't the best but they fit into the same bag with the yarn, which made them almost free. 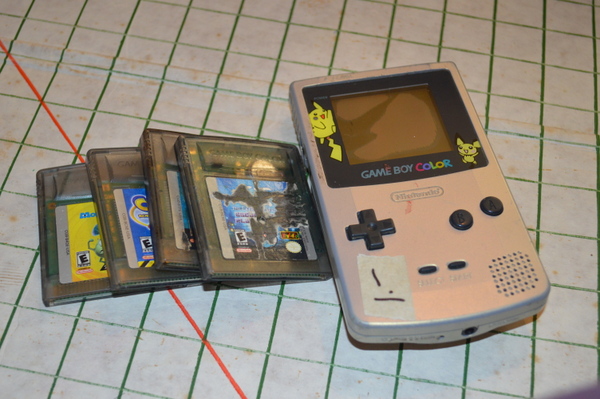 There are some things that should have made it into my bag but didn't, like the pair of what looked like decent sewing scissors. I had them in my hand...why did I put them back down?

I've been wanting a shadow box to keep miniatures in and I think this little house will clean up well. Most of the contents will wind up going back to the thrift shop. I'll keep the elephant and little tea cup and the boys have already claimed the Wade Rose Tea raccoon and owl and a little padlock. 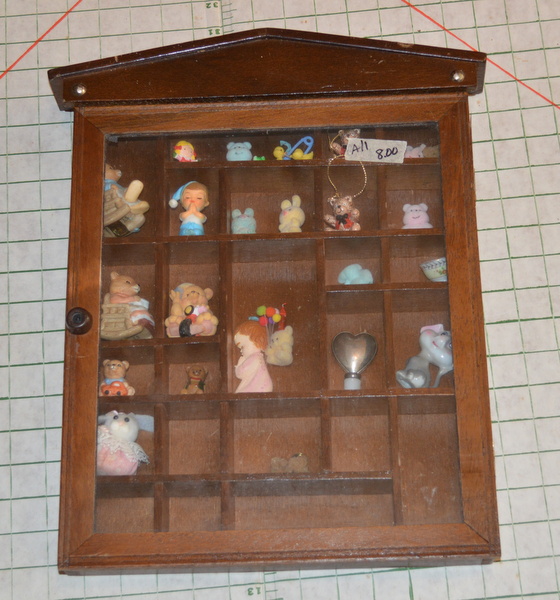 As we were walking out to the car, I spotted the busted up ceramic squirrels on a table in the carport. They would have easily fit into one of my three bags because I was trying not to be obnoxious and overstuff them, but I'd already paid for everything. I went back in, hoping they'd let me have them for a buck or two, but the nice lady wound up giving them to me. (And seriously, what's the market value for squirrels that have had their tales snapped off and badly glued back on?) 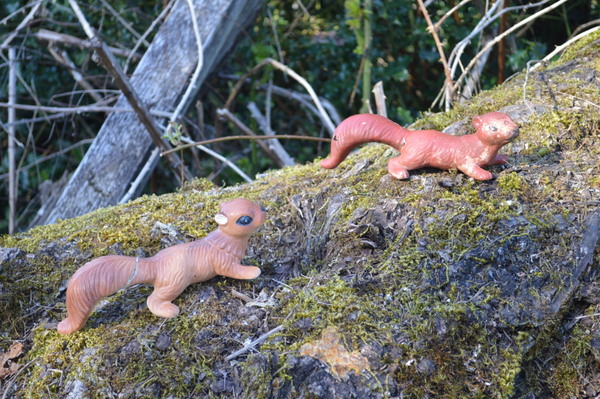 I love, love, love these little guys! I saw one in an Instagram picture the day before  -- look at the squirrel on the doorframe -- that got me feeling all nostalgic. Grandma had a set in her yard for years and I'm pretty sure I've got them in a box of stuff we brought home from her place, but I'd be afraid to put them out in the yard because I'd be crushed if something happened to them. Our place has critters and boys crawling around in the trees.

These are where I can enjoy them from my kitchen window. If something happens to them, they were already far past their prime. (Although if someone steals my squirrels, I'm going to be seriously ticked off!)

The entire haul only cost me seventeen bucks. Not everything made it into the pictures. I also got a potato masher that's nicer than the one I already had and a set of reproduction Civil War newspapers and a big stack of felt that might be good for all of those Christmas ornaments I've been pinning and a kit for making plastic canvas gingerbread houses.
Posted by Michelle at 4:00 AM