{Yarn and Books} Finally, Some Progress

Have you ever had one of those projects where you keep knitting and knitting and seem to get absolutely nowhere? I started this pair of socks almost a month ago and they've been absolutely dragging. The break I took to knit Another Cake Shawl didn't help matters much, but half a sock shouldn't take nearly as long as this one did.

Monday night I finally finished the ribbing on the first sock. Hooray! 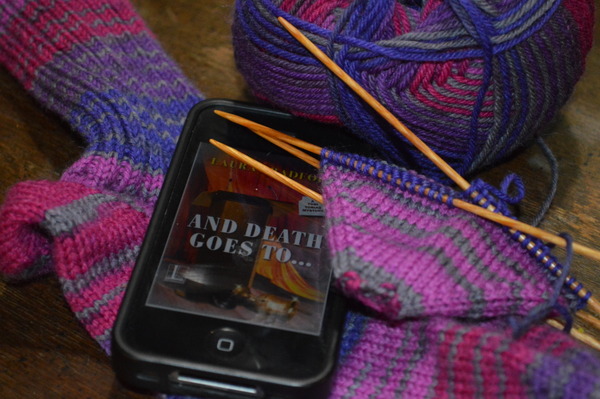 And Death Goes To.... by Laura Bradford

For years, Tobi Tobias has dreamed of winning the Golden Storyboard, imagining herself ascending the spiral staircase while her award winning commercial plays on the screen behind her. Watching another woman win the prize is a disappointment, but that's quickly overshadowed by horror as the platform at the top of the staircase collapses and Deidre Ryan falls to her death. Something went very wrong during the awards ceremony and Tobi is determined to find out what.

I can finally say that I like Tobi a lot. In the first book, a really enjoyed the writing but had some complaints about Tobi herself. In the second book, her circumstances had improved and she was easier to like as a person. Now it seems that she's finally grown up and this is definitely my favorite book in the series so far.

Accessories to Die For by Paula Paul

The owner of an upscale consignment shop in Santa Fe, New Mexico find herself helping an old friend who has just escaped from prison. I picked this one up because I love the southwest and didn't realize until I finished the book and saw a list of the author's other titles that this was the second title in the series. (It was there in the book's description, I just didn't read closely enough.)
With one exception, the characters feel more like real people than cozy mystery characters and although Irene is trying to help her friend find her missing son it didn't feel like the same type of mystery I'm used to.


Disclosure -- I was provided with advance review copies by the publishers. All opinions are my own.