I knew that Christmas shopping was going to stress me out, so I built extra time into the schedule for ducking into thrift shops.

Just look at this little cabinet! It's missing one of the urns and needs some touch up paint but isn't it the absolute cutest little piece of furniture you've ever seen? 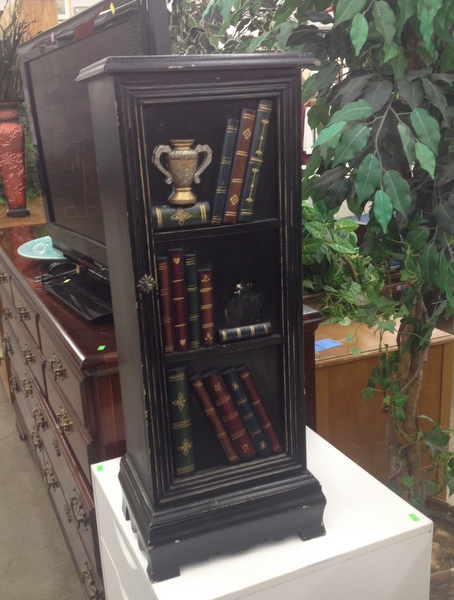 Resisting temptation is much easier when you know the thing that's tempting you is going to a good home. In this case, Adult Daughter was with me and snapped it up for her apartment.

I'm still on the prowl for needlework supplies. None of this came home with me. 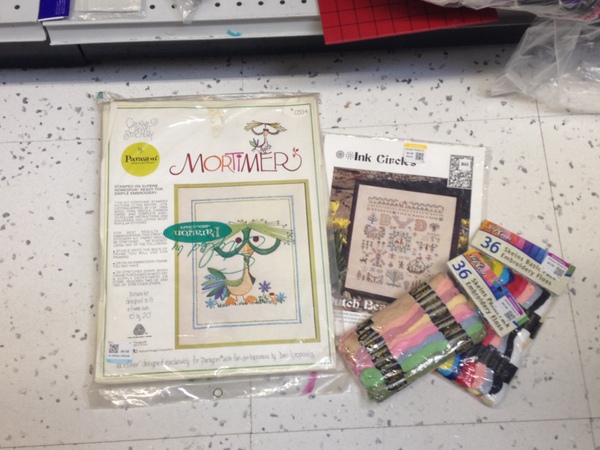 I couldn't tell if Mortimer was vintage or meant to look vintage, and it didn't matter because although he's adorable he's not my style.

The unopened packages of embroidery floss were $4.99 each. That's what Joann's wants for them...and Joann's takes coupons. I've got this crazy idea that, unless they're old and rare and particularly wonderful, used craft supplies should cost less than brand new craft supplies.

The Ink Circles pattern was six bucks. That's probably a good deal for a pattern that sells new for eighteen... but you'd be gambling that all of the pages were in there and there was more than enough tape to prevent peeking. I've seen several patterns like this at different shops and there's no way I'd take the risk.  A multiple page cross-stitch pattern that's missing one or more pages would be pretty much worthless.

A day later I was at a different thrift shop picking up supplies for a project. It's the Candlestick Maker! 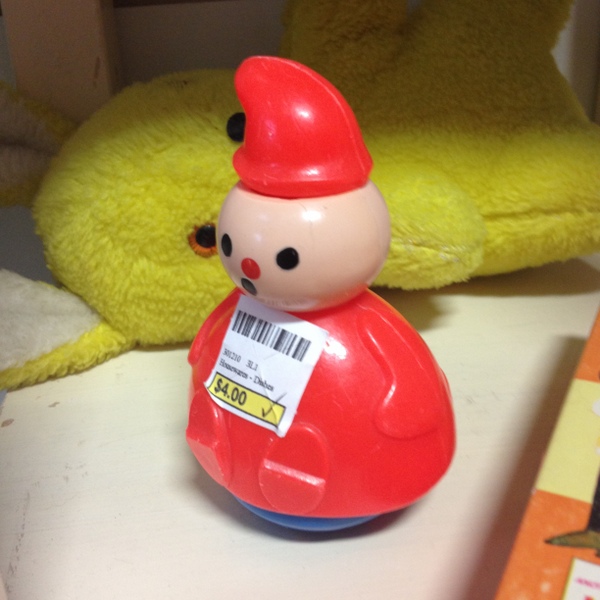 I'd completely forgotten about the Three Men in a Tub bath toy until we went to Christmas Storybook Land last week and I realized how many nursery rhymes my sons don't know. Or care about. The exhibit reminded me of the toy and although there's the nostalgia element it was a pretty dumb toy...

Maybe a complete set would have been tempting, but judging by the price they had on this little guy, probably not.
Posted by Michelle at 4:00 AM

Our thrift store isn't very large - and it's mostly clothes - but the prices sometimes flabbergast me. A Walmart/prefab computer desk will sometimes be more than a new one. Though it is our favorite place to get clothes for our baby dolls as they can wear 0-3month clothes and we can find those for $1 or less!

I adore thrift stores! Pure exhilaration to find that unique and out of the ordinary piece! We should go shopping together LOL!

I love antique and thrifting. So many treasures to find and just browse. Sometimes it’s just fun to look and come home with nothing! It’s much better for my house anyway (that is already crammed full of “vintage”).