Someone Else's Stash of Notions

Remember that box of buttons that I posted about yesterday? I kept wondering about it, especially after I took a closer look at the labels in the picture. The box itself is probably worth something, and I need curved safety pins and bobbins.

We had to run up to Salem again on Friday and were even on the right end of town, so I stopped by the thrift store even though craft stuff always gets scooped up fast.

Look what was sitting there waiting for me -- 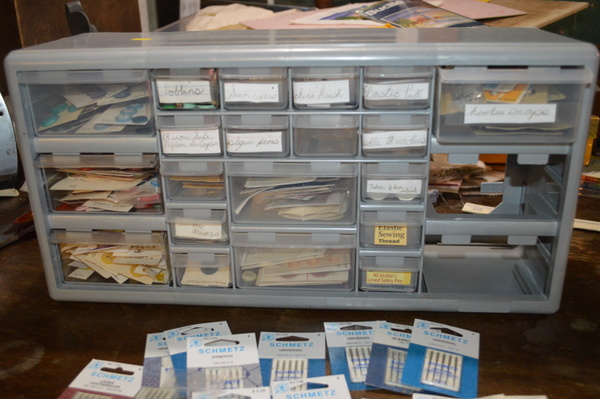 It leaked buttons and needle threaders all over the car on the drive home. I think I've got someone's entire notions stash here and the folks at the thrift shop just wrapped some clear plastic around it to hold the drawers shut and slapped a price tag on it. That's not their usual pricing strategy.

There are at least ten packs of unopened machine needles that will fit my machine, along with some others I'm not sure about. I think the others might work on the Featherweight, but I'll do some research first. None are my preferred size, but there are leather needles and denim needles and ball point needles...all of the stuff that I need once in a blue moon but refuse to make a special trip to town and spend money on.  I'll use those. Or my daughter will.

There are twenty full packages of hand sewing needles -- tapestry needles, darning needles, applique needles, and those wicked curved ones for fixing upholstery. I never ever have enough needles, so these are a welcome addition to my stash. I've now got all of the sew in snaps and hook and eye closures I could ever need... 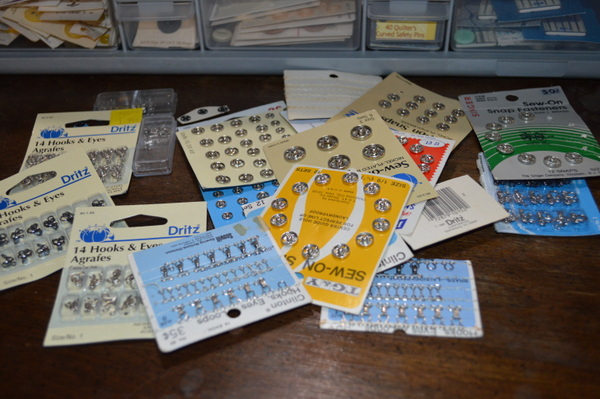 I don't know if a needle threader will help with my stitching, but now that I've got a few I'll give it a shot. 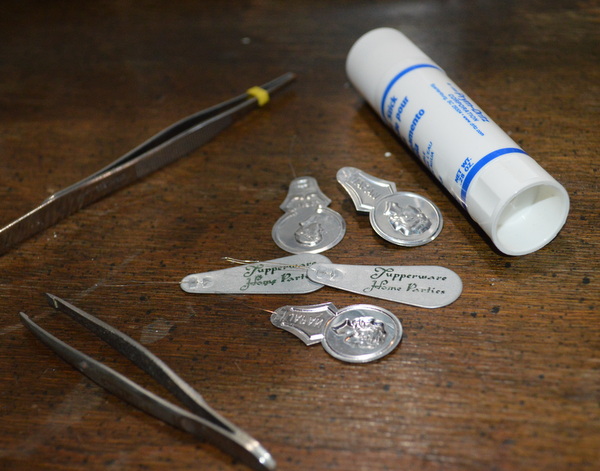 Don't forget about the buttons. I counted 190 complete cards of them and didn't even try to figure out how many loose buttons there were. Our mystery stitcher also apparently kept every one of those little envelopes with extra buttons for repairing your garment. They're not old enough to be interesting, but buttons are buttons. 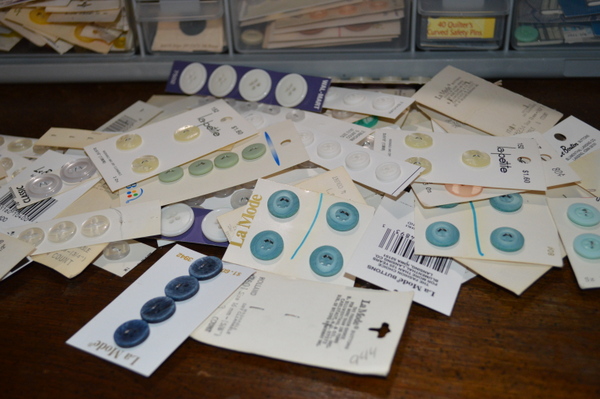 The very specific labels on the drawers intrigued me. No bobbins in the bobbin drawer or curved safety pins, but there were eighteen iron safe nylon snaps in the drawer that claimed to hold them. The machine brush and seam ripper were there as promised. 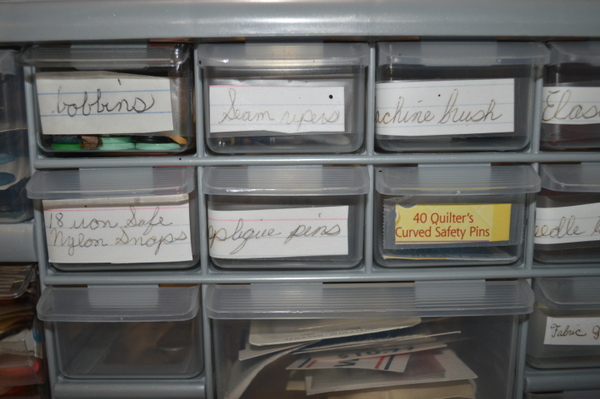 It would be smart of me to clear out the drawers and fill them with my own notions. I'd feel a bit bad about removing the labels that are already there, but I don't have enough nylon snaps to keep a specific drawer for them.

How do you organize your little notions?
Posted by Michelle at 4:00 AM

What a find! I'm not much on organization, so no help there from me.