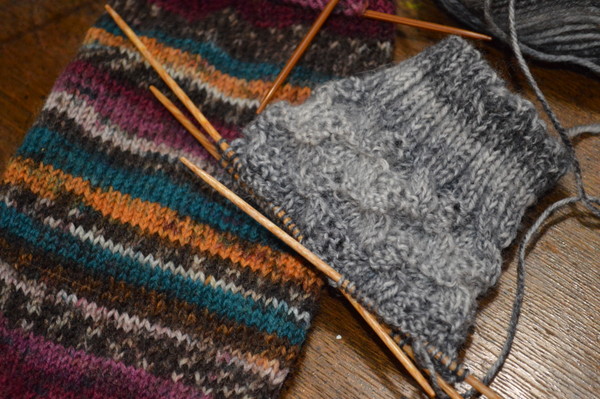 Since last week's post, I've cast on another pair for mindless knitting and started Tales From the Crypt, another pair for Super Sock Scarefest.  Which means I'm still avoiding that heel....

A librarian's love letters to the books she works with? That sounded interesting. And the first half of the book was, even if it was sometimes jarring to lurch from a note to Stephen King's Misery to the author's drunken encounter with a bookshelf at a party she wasn't invited to. This book is at its most entertaining when it's dealing with childhood classics or a popcorn cookbook or Fun and Games with Your Pocket Calculator. But the letters are only half of the book and what follows them -- lengthy recommended  reading lists and tips on how to turn your lover into a reader -- isn't nearly as much fun. I don't think I love books enough to fall into this book's target audience...  or maybe I just don't love the right books.

Jane Norton has no memory of the car crash that killed her friend David, or of writing the suicide note that was found after the accident. Years of her life are just gone and she's kind of staggering through the present, trying to make sense of it all. Once the plot gets moving (which is more than halfway through the book) things get interesting, but the beginning really dragged for me.

Disclosure -- I was provided with advance review copies by the publishers. All opinions are my own.