{Books and Yarn} I'm So Tired of Socks

We all saw this coming, right?  After however many pairs of socks I've finished so far in 2017 I'm at the  point where I just don't want to do another inch of ribbing, or turn another heel. So I'm playing with bookmarks. 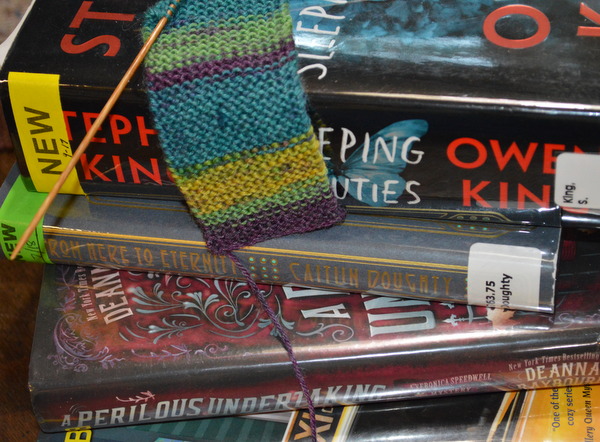 That doesn't make much sense, since I'm working with the exact same needles and the same weight yarn. But - for the moment at least - this is more fun. I'll stick with it until the novelty fades.

At that estate sale in January, the one that had all of the buttons and zippers, I got a sandwich bag of sock yarn leftovers for a quarter. I thought I'd use it to try some Frankensocks, but since I have no idea what the fiber content is or how the yarns will play together, I don't feel at all guilty about using some of it up this way. (There's also the leftover yarn from all of this year's pairs of socks. I've got plenty of options to play with later.)

I've also got a stack of library books I can't wait to read. The boys are taking another class at the library, which means I've got a lot of time there to get myself into trouble.

Being promoted to head of programs and evens at the library where she books is a big deal for librarian Carrie Singleton. It means she needs to change her wardrobe, and that she can afford to move into her own place. Too bad one of her co-workers is furious that Carrie got the promotion and tries to sabotage her at every turn. Even worse, the speaker at her first major event drops dead before he can even make his presentation. The murder mystery in this one is overshadowed by Carrie's new life, which includes lots of shopping and eating out. It's upbeat and a great choice for a reader who wants to escape to a nicely haunted library for a few hours.

The Dead Inside and We Can't be Friends by Cyndy Etler

I read these two books back to back and they left me tied in emotional knots. The first book, The Dead Inside, tells the story of Cyndy's sixteen month stay at Straight Inc.  I sort of dimly knew that places like it existed. but I had no idea... When she was a young teen, Cyndy ran away from her abusive home. Her mother responded by signing her into a cult-like inpatient drug treatment facility, even though she had only briefly experimented with beer and pot. After more than a year of physical and mental abuse, she's pronounced "straight" and sent back to her old high school, terrified that just hearing the wrong "druggie music" or speaking to her "druggie friends" will send her into a downward spiral that will leave her dead on the streets. We Can't be Friends tells how Cyndy overcame the brainwashing and started to live a normal life again. Remember how when we were growing up, Go Ask Alice was supposed to scare us away from drugs? Cyndy Etler's books will leave you scared of the treatment facilities. I'd much rather my teens read The Dead Inside and We Can't be Friends, especially the author's notes at the end of the second book. I highly recommend them both, but they aren't "feel good" reads. They'll leave you upset.

Disclosure -- I was provided with an advance review copies by the publishers. All opinions are my own.
Posted by Michelle at 4:00 AM

Tired of socks? That's understandable. While I have not knit nearly as many pairs as you have, I recently realized it would be so easy to accumulate a stash of beautiful yarn just as I have a stash of fabric; some quilting cottons have been waiting for decades to be sewn. So I decided not to buy any more yarn till I've knit up the four pairs I have waiting. We plan to move to a smaller house next year, and I need to let go of some of my craft items. It's not easy!