My DIY Sock Sampler for Summer Three months have passed and it's time to put together another yarn sampler. I've been planning yarn choices for a while, so I started with the skeins I'd already decided on and filled in with some that would add variety to the mix. I don't know why I feel the urge to match my yarn choices to the weather and time of year, but I've been doing that more and more lately. To the point where I'll pull a yarn from my stash and decide to save it until June or July.  Or October. That's silly, right?

This time, I had a hard time narrowing down my yarn choices to seven pairs. And then I forgot the one I'd planned on casting on next so I made it eight. They fit in the case, so it'll work. 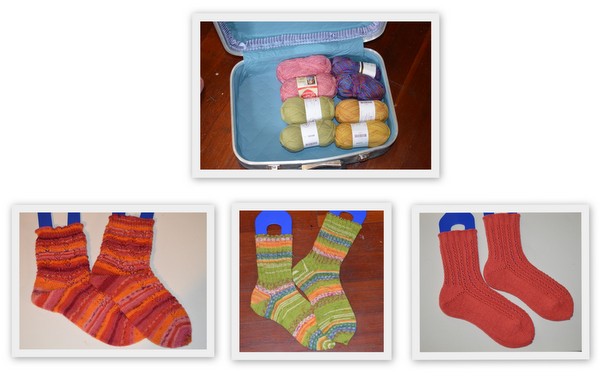 Sock Sampler number two was slightly less successful than the first one, depending on how I interpret "successful."  I finished three pairs instead of four...but I also made three pairs of socks from yarn that wasn't in the box, but had been in my stash for a while.

I love seeing your suitcase full of skeins. I recognize that little blue case because I worked for the company that used them for their dealers. I have one also, even though I worked in their offices as a keypunch operator and office assistant. I think however you feel good about using your yarn is what you should do. I have no rhyme or reason most of the time, just want to use up what I have and vary the colors so I'm not knitting the same color behind each other.