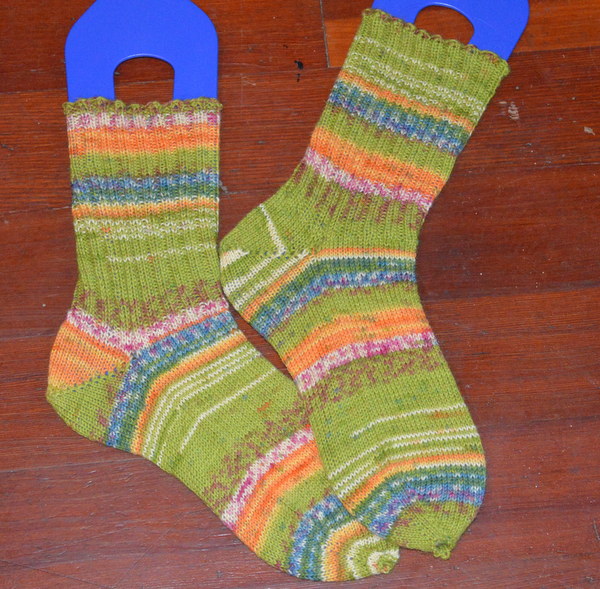 I was absolutely loving this pair until I picked up a stray sock in my sewing room and realized that the colors are almost identical to the Green Envy socks I made a couple of years back. After that, my enthusiasm faded a bit.

The yarns aren't identical, but they're sure close. Close enough to have me wondering for a brief moment if I'd somehow finished the first sock of the pair and then forgotten it. But that wasn't it -- I had a second skein waiting for me to cast on. It took a search of my own blog to figure out what pair the extra green sock was from. 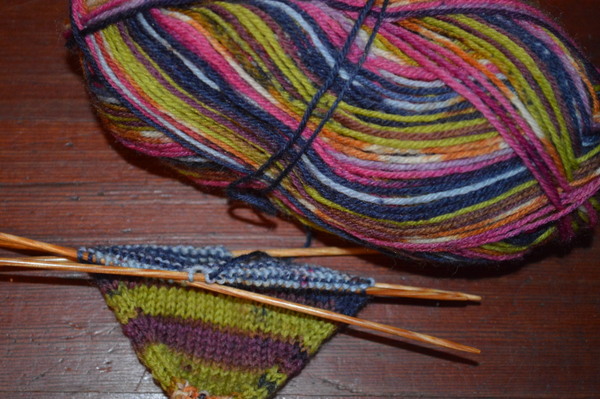 I know for a fact that I don't have any socks that look like this pair is going to. Purple and green and pink and blue socks are a new thing for me!

I had a hard time getting into Lie to Me by Jess Ryder, and an even harder time sticking with it. I made it the whole way through the book, but it took a few days of off and on reading. Buried in a box of old baby clothes in her father's attic, Meredith finds a VHS tape labeled with what she believes is her mother's handwriting, dated shortly before her mother's disappearance. She asks her father if he knows what's on it and he becomes agitated and tries to throw it into the pile of leaves he was burning. Meredith pushes him to the ground to save the tape, even though she's worried about his medical condition, then has it transferred to DVD so she can watch it. And that's about where the author lost me. The contents of the tape are disturbing, I guess, but it was recorded by Meredith's mother shortly before the woman was institutionalized. Knowing  that her mother was mentally ill, I don't understand why Meredith took the message on the tape as seriously as she did. The story shifts back and forth in time, between Meredith and two other characters who were involved in a crime thirty years earlier. I knew it was building up towards a horrible crime, but I just couldn't work up enough enthusiasm to worry about the characters.

Disclosure -- I was provided with an advance review copy by the publisher. All opinions are my own. This post is linked to Patchwork Times, Crazy Mom Quilts , Wrap up Friday iknead2knit, and  Frontier Dreams
Posted by Michelle at 4:00 AM

Absolutely perfect name for these. They look nice and summery

You must really like these colors to have picked the similar colors twice. I'm glad you found the other pair. Cute name for them too.

Carie @ Space for the Butterflies said...

Both pairs are gorgeous - I can see why you picked similar colours twice over :)

I knit some, though I have never tried socks. Love these and really looking forward to the next pair. I probably would have more than two pair of similar green socks if I did knit socks. I say, "you can't have too much green".

Thanks for the review of "Lie to Me". With so many books to choose from, there is no sense wasting time on one that is just "meh". Hope you enjoy your next selection.