Just look at my new socks! It's too bad that you can't feel for yourself how wonderfully dense and squishy the Elann Esprit is. 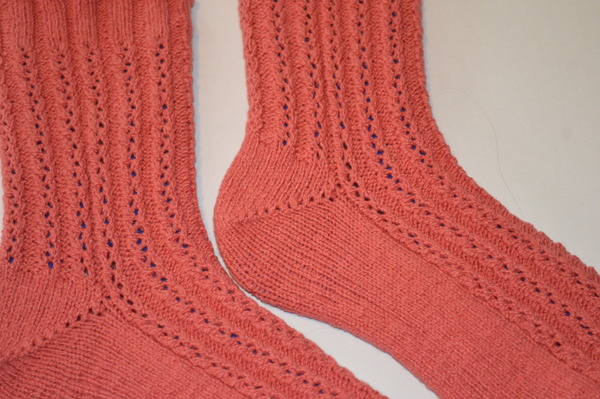 My original plan for this yarn was Laburnum from the same page of the same book, but the stretchy cotton is a bit of a challenge and I knew my needle tips weren't sharp enough to knit three stitches together that many times. So I went with the easier option and I'm glad I did.

The stitch pattern is simple enough that I didn't have to look at the pattern or keep track of my rows, beyond looking at the last lace row to see which decrease I'd done on that one. I think I've used it before and I know I'll use it again. 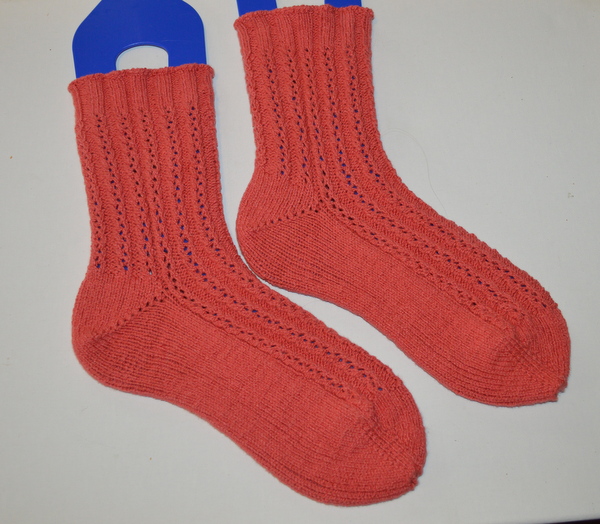 The Girl Who Was Taken by Charlie Donlea

Two girls were kidnapped. Megan McDonald escaped the bunker in the woods, became famous, and authored a bestselling book about her experience. Nicole Cutty has still not been found. The focus of The Girl Who Was Taken is less on their kidnapping than on Nicole's older sister, Livia. Livia is training in forensic pathology and waiting for her younger sister's remains to be discovered so that she can finally have answers. It's all a lot more complicated than just two kidnappings and the book, which jumps back and forth from the weeks before the kidnapping to the present and between characters, gets more interesting as it progresses. The autopsies that Livia performs as part of her training are described in extreme detail. I'm not sure I wanted to know so much about decay.

I love reading about Brandy and her mother and in this book Vivian gets more chapters than usual, which makes it even more fun. Because, in addition to their own reality show, these two are responsible for writing the books about their exploits and talk directly to the reader, letting you know which book to read to catch up on whatever past events they're describing. I started reading this series with the tenth book and I'm still not caught up, but I know which ones I need to read first to get to the bits of back story that intrigue me most. If you like funny cozies that (I hope) could never happen in real life, I highly recommend this one!

If you're looking for a cozy mystery that will provide you with some vicarious crafting, I highly recommend this one. Cora Chevalier's craft retreats sound absolutely wonderful and include lots of opportunities I'd have never thought of, like digging clay from a nearby riverbank. The mystery is completely separate from the crafting.  I wish that the author would have given more details about the disappearance and the circumstances surrounding it (trying to avoid spoilers here), but the rest of the book was enough to make up for that. I'll be watching for the third book in the series.

A Killer Keepsake by Ellery Adams and Parker Riggs

This has all of the elements I love about cozy mysteries, including an an intriguing series of events and the ability to vicariously enjoy someone else's hobby. And did I mention that there's a haunted doll and a truly chilling backstory that unfolds over the course of the book, explaining her history? I bought the first book in this series a while back, but haven't read it yet. After reading A Killer Keepsake (because of course I'm going to read the one with the haunted doll first) I'm moving that one closer to the top of my to-read-soon pile.

Disclosure -- I was provided with an advance review copies by the publishers. All opinions are my own. This post is linked to Patchwork Times, Crazy Mom Quilts , Wrap up Friday iknead2knit, and  Frontier Dreams
Posted by Michelle at 4:00 AM

Thanks for visiting my blog and leaving a link - I so appreciate it. Oh, those socks! Love everything about them! Thanks so much for sharing!

Those are a beautiful color AND Pattern. Very pretty. I think after I finish the pair I'm working on, I may cast on a red pair or finish up the rest of my little scrappy balls. Decisions, decisions.